Home / Cafe Chat / The best of both worlds

The best of both worlds

By Teri Carnicelli
At first it seems like a head-scratching combination: burgers and tacos? Why not just stick to one or the other?

The answer, says Eva Hofstedt, is that the Phoenix population, with its mix of cultures, has two favorite food items: the all-American hamburger, and the ever-popular street taco. So why not give both sides the best of both worlds? 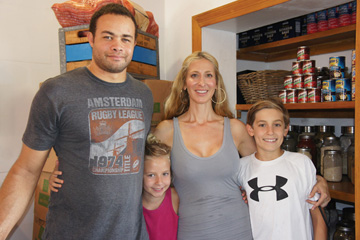 Ron Ingram, left, manager of The Stand Burgers and Tacos, and Eva Hoffstedt, owner, had some help running their fledgling eatery over the summer from Eva’s two children, Olivia, 8, and Harrison, 12 (photo by Teri Carnicelli).

Hofstedt opened The Stand Burgers & Tacos in January at 3538 E. Indian School Road, the former home of Maui Dogs—and a depressing succession of former failed eateries before that. But Hofstedt and her friend and manager, Ron Ingram, believe they have found a formula that will finally bring success to this otherwise nondescript building.

“We thought the concept was going to be a little out there, but so far it’s been really well received,” says Hofstedt, who comes from a long line of restaurateurs, starting with her grandmother, Olivia Garcia, an icon in the Phoenix food scene. Olivia and her husband started the original Garcia’s, and her descendents are still part of familiar names such as Julio G’s, Sylvia’s La Canasta, Manuel’s, El Pollo Asado and more.

For Hofstedt, this is her first solo venture as a restaurant owner, and while she has plenty of moral support from her large family, she and Ingram are on their own when it comes to the success or failure of The Stand. So far, the pendulum is swinging heavily toward success.

Part of what’s making those near and far sit up and take notice of this modest eatery is its drilled down menu with few selections but heavy with big, bold flavors. For example, “The Standard” is a burger that is created from a mix of meats that are ground in-house, fresh every day. The chuck, brisket and short rib combination makes for an exceptionally flavorful—and juicy—burger. “You’re going to need a few napkins, at least,” Hofstedt laughs.

If your taste buds are feeling more south of the border, there are three tacos to choose from: the short rib taco, the chicken taco, and a seasonal veggie taco that includes black bean and quinoa, pickled red onion, pickled cabbage, and cilantro.

Though they don’t publicize it, nearly everything in the restaurant is gluten-free. You can even get a gluten-free bun for your burger, if you want. And don’t forget to finish off your meal with a hand-spun shake. You’ll find your usual chocolate and vanilla, as well as specialty flavors like salted dulce de leche, choclate chile, and banana stand. Or, for a lighter selection, get a fresh-squeezed lemonade that’s found that perfect balance between sweet and tart.

“Everything is made fresh; the only thing you’ll find in our freezer is the ice cream,” Hofstedt says.

The place itself is fairly small, although Hofstedt semi-enclosed the south-facing patio that was just feet from Indian School Road and put in a portable air conditioner with a powerful fan. The wall buffers the traffic noise and also provides a visual barrier from the busy roadway and sidewalk, creating additional outdoor seating that is particularly popular in the cooler months.

“So far we’ve been really well received by the local neighborhood,” Hofstedt says. “They are fierce about supporting local proprietors and we’re really grateful for that.”

And it’s not just the food that keeps the regulars coming back.

Hofstedt adds that online reviews and word-of-mouth have brought in customers from as far away as Anthem and East Mesa.

“We want them to feel like we over-delivered, like they got more than their money’s worth,” Ingram says. “We feel like there are always things we can fix and do better, so we’re always striving to improve.”