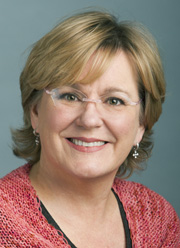 North Central resident Karen Churchard, assistant deputy director at the Arizona Office of Tourism in Phoenix, was inducted in to the IFEA Hall of Fame on Sept. 16, during the 58th Annual International Festival & Events Association (IFEA) Convention & Expo in Pittsburgh, Pa.

The IFEA Hall of Fame recognizes those outstanding individuals who, through their exceptional work and achievements, have made a significant contribution to the festivals and events industry and a profound difference in the communities they serve. Churchard joins the ranks of 53 others inducted into the hall over the past 22 years.

In 1981, Churchard began an internship at the Fiesta Bowl. As the success of the Fiesta Bowl took off, Churchard’s job followed, dramatically expanding and changing its focus. Her role as events intern matured into director of Special Events, and finally vice president of Operations, overseeing all 50-plus special events, two college bowl games, staff and volunteers.

Churchard also was instrumental in writing persuasive bids that earned Arizona and the Fiesta Bowl the opportunity to host major national events including the Bowl Championship Series and the 1993 U.S. Figure Skating Championships.

After 21 years, Churchard left the Fiesta Bowl to open her own consulting business. She was quickly tapped by the Greater Phoenix Convention & Visitors Bureau to write Arizona’s Bid for Super Bowl XLII (42)—which was awarded and held in February 2008.

While continuing her consulting, she was hired in 2004 as president and CEO of the Arizona Tourism Alliance. In 2007, Churchard was appointed by then-Gov. Janet Napolitano to establish the Arizona Centennial Commission, serving as its director and ultimately helping to plan and direct the state’s 100th anniversary of statehood.

Churchard continues to work in state government as the assistant deputy director of the Arizona Office of Tourism, overseeing Strategic Planning and Research for the state agency. In her role, she also consults with the agency’s director on sponsorships of major events in Arizona and is assisting the Arizona Super Bowl Host Committee with the planning of Super Bowl XLIX (49) in 2015.

Her Arizona peers who collectively nominated her for this prestigious award said she is the ultimate event professional, has been a huge difference maker to the industry and they couldn’t even begin to describe the void that would exist if she had not dedicated her life’s work to the field.