UPDATE: The potential investors contacted by Preserving Community Aquatics (PCA) were unable to meet with Brophy College Prep representatives on Sept. 30, so the meeting was cancelled. No new meeting has been set as yet. The Camelback East Village Planning Committee voted on Oct. 1 to forward a recommendation of approval for removing the special permit for the swim club property. That recommendation will be considered by the Phoenix Planning Commission during its meeting Tuesday, Oct. 8. The meeting begins at 6 p.m. in the Phoenix Council Chambers, 200 W. Jefferson St.

The question regarding whether a special use permit can be removed in order for the aquatic and recreational campus at 29th and Campbell avenues to be razed to make way for new housing will come before the Phoenix Planning Commission on Oct. 8—maybe. 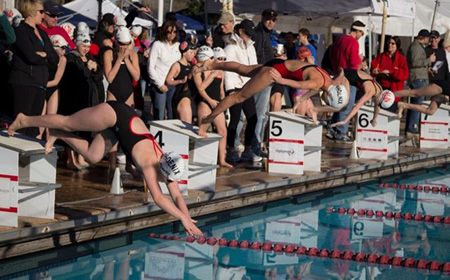 The aquatic center owned by Brophy College Preparatory at 29th and Campbell avenues over the years has played host to numerous national and college swim meets, as well as served as a training facility for several future Olympic swimmers (photo courtesy of Preserving Community Aquatics).

Brophy College Preparatory, which currently owns the 10-plus-acre property, early this year had announced its intention to sell the land to a housing developer in order to use the funds to construct Phase II of its Brophy Sports Complex, which would include an indoor athletic pool for its students.

Since Brophy’s announcement, longtime users of the swimming facility and other community activists have worked to try and find another solution that would serve the school’s and the community’s needs—including finding another potential buyer who would keep the swim club intact.

Just last month, Brophy agreed to review any additional bids on its property, which was good news for newly formed nonprofit Preserving Community Aquatics (PCA) and its supporters. However, PCA spokesperson Tricia Schafer, while grateful for Brophy’s cooperation and assistance, was cautious about being too optimistic.

“It could be difficult to find someone who can match Ryland Homes’ $6 million bid, especially in such a short time frame,” she says. “It’s my hope that when we meet with Brophy on Sept. 30, we will be able to present some bids that they will be willing to consider.”

Schafer says that from the beginning, PCA (www.preserving communityaquatics.org) has always been very solution-oriented and has been respectful of Brophy as both the property owner and a longtime community member. She hopes that the two nonprofit groups can ultimately find a solution that gains the Jesuit all-boys high school the funds it needs for its construction project while keeping an important community asset around for generations to come.

The swim club, acquired by Brophy College Preparatory in 2002 for $1.5 million, is the only competition-certified, 50-meter pool in the city of Phoenix. It was the home of the fledging Hubbard Family Swim School, has been used for training by Olympic swimmers from around the globe, and is home to several competitive swim clubs in the Valley, including the Phoenix Swim Club. It also has hosted many national and college swimming competitions.

The pool was built in 1988 by well-known Valley real estate developer Charles Keating. The special use permit was approved by the Phoenix City Council in January 1990 to allow for a private athletic club with non-member usage (i.e. visiting swim teams) but no open public swimming.

The North Central News went to press prior to the Oct. 1 CEVPC meeting.