By Teri Carnicelli
Take a book, leave a book. That’s the concept behind the “Little Free Library,” a not-for-profit international organization that encourages people to build miniature, sharable “library” boxes in their communities. The original idea was to serve rural populations or the elderly, who didn’t have the means or ability to travel longer distances to a real library. 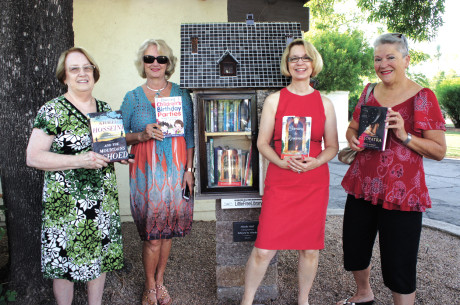 But both the idea and the purpose have spread, with Little Free Library (LFL) boxes being dedicated to loved ones who have passed on, or to serve a neighborhood’s children, or even as a means of promoting a new book by a look author.

For North Central resident and author Barb Hinske, it was a combination of factors that inspired her to put a library box in her small condo complex at 3rd Place and Northern Avenue.

“The concept of the free library box grabbed me and I idly remarked to my husband that I’d like to sponsor a library that looked like Rosemont, the mansion that is almost a character in my novel. My husband said he could do it, and the next day there was plywood and tools all over the yard.”

In a short amount of time, Little Free Library #6616 was born. Brian Willis, Hinske’s husband, said it took him three weeks to build the dollhouse-like library box, complete with stone-finished exterior, tile roof, and even a miniature dog in the window. It’s mounted on a cement post with metal rebar reinforcement, so it can’t be knocked over—or stolen.

“When I was a kid, we always did little construction projects like that,” says Willis, who is a sales manager by trade. “I had a lot of fun doing this.”

“We’ve named our library ‘Hinske Hall,’ in loving memory of my dad, Edward R. Hinske, who was an author and read to me every night of my childhood,” Hinske says.

Hinske and her “Casa de Northern” 13-home condo community, along with supporters and friends, celebrated the ribbon cutting of “Hinske Hall” on July 13. Several visitors brought books to put in the box, and at least one person eagerly grabbed a new release that she said she had been “dying to read.”

Also in the box is a copy of Hinske’s first self-published novel, “Coming To Rosemount,” the first in what she plans will be a series.

“I published in December, and it is actually selling well and I’ve done book clubs and have 36 reviews on Amazon. Our Little Free Library is meant to look a bit like Rosemont, the manor house in my book,” Hinske explains.

Hinske, who is president of her community’s Homeowners Association, first brought the idea to the HOA board, which gave its unanimous approval. “Hinske Hall” now joins two other Little Free Libraries in the North Central community—at 1218 W. Ruth Ave., and another at 1319 W. Towley Ave., both built and dedicated in honor of loved ones.

Little Free Libraries now exist in all 50 states and 40 countries. According to the website, www.littlefreelibrary.org, “Little Free Libraries have a unique, personal touch and there is an understanding that real people are sharing their favorite books with their community. These aren’t just any old books, this is a carefully curated collection and the library itself is a piece of neighborhood art.”

That is particularly true in Hinske’s case. “Hinske Hall” is one of a relatively few number to be awarded LFL’s “Library of Distinction” recognitions, “due to it’s unique design, creative outreach to friends and neighbors, and the enthusiasm of its stewards and patrons.”