Local demand up for luxury homes

By Teri Carnicelli
The real estate market has seen some interesting changes this year, including new-home buyers looking to a much higher-end market thanks to more lenient loan managers.

A recent report from the W. P. Carey School of Business at Arizona State University showed that the luxury market is finally booming back, now that more banks are willing to finance jumbo loans.

“Access to finance at the high end of the market has improved recently with more lenders offering jumbo loans,” says the report’s author, Mike Orr, director of the Center for Real Estate Theory and Practice at the W. P. Carey School of Business.

“Along with good returns from the stock market, this has strengthened a recovery in the luxury market, where sales volumes were back to 2007 levels in June.”

That’s good news for custom and luxury homebuilders in the North Central Phoenix area, who have seen the demand for their higher-end residences rise and who are stepping up production to fill that demand.

Porchlight Homes
Porchlight Homes recently broke ground on the model for its new luxury home gated community, dubbed “Claremont Estates,” located on 5.5 acres at 7th Avenue just south of Maryland Avenue. The property is best known in the neighborhood as belonging to the Mahoney family for several generations; the neighborhood itself was established in the 1920s. 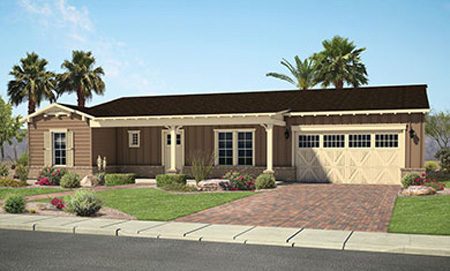 Porchlight Homes is building a new luxury home gated community, dubbed “Claremont Estates,” near 7th and Maryland avenues. The homes are single-story and range in size from 2,811 to 3,529 square feet (rendering courtesy of Porchlight Homes).

“We completed a small development last year at 3rd and Maryland avenues called Madison Meadows, so we knew the area and could see a great need for new home opportunities for North Central buyers,” explains Ryan Larsen, vice president of Operations for Porchlight Homes. “It isn’t often that you have a chance to design an infill community in North Central.”

Larsen says Porchlight made an effort to be sensitive to the integrity of the area by incorporating real brick, siding, front porches, and grass front yards for its Claremont Estates development. “We hired a professional color consultant to study the area and create rich color schemes that are appropriate for the area.”

There are only 15 lots total in Claremont Estates and Porchlight already has sold two homes just from the posted signage at the site. The homes are single-story and range in size from 2,811 to 3,529 square feet.

He attributes the growth in demand for luxury homes in part to savvy homeowners who survived the real estate meltdown.

“Demand is strengthening in part because people are now more likely to have equity in their current home, which enables them to make a move,” he explains. “In addition to this, we are seeing buyers who may have gone through a short sale or foreclosure during the downturn, but enough time has passed to allow them to qualify to purchase again.

“Add historically low interest rates into the formula and it makes sense why the best properties aren’t lasting long on the market.”

The first home should be complete in late October, but new build opportunities are available now. Sales are through Bobby Lieb of HomeSmart Realty, 602-761-4646. To view renderings and specifications of the homes available, visit http://porchlighthomes.com.

Starion Custom
If you’ve drive north on Central Avenue in the last couple of months, you could not have failed to notice a large, French-style home slowly going up on the east side just south of Glendale Avenue.

That 5,000-square-foot luxury residence is the future home of Rick Stark, owner of Scottsdale-based Starion Custom Residences. It will shortly be joined by a neighboring custom home to the immediate north, at the corner of Central and Lamar, which Starion also is constructing—and this one has already sold. It will be similar in design to his French country home, but it will be only one story.
Stark lives just a few miles away from his future home, and his wife is a Central Phoenix native who attended Xavier College Preparatory. Their children attended St. Francis Xavier and Brophy College Preparatory. “So we kind of think of this as ‘our neighborhood,’” Stark laughs.

As a custom homebuilder, Stark says he’s seen more demand of late in the Central Phoenix area, though his company also specializes in renovation and remodeling, particularly in the city’s historic neighborhoods. As for the property at Central and Lamar, “I bought the 1-acre lot and split it because the market was so bad for so long, I was looking for the higher, best use for that property. It wasn’t my intent to keep the home, but we kind of fell in love with it.”

He says building new custom homes in Central Phoenix can be challenging because there are increasingly fewer vacant pieces of land. “You typically have to knock something down,” he says.

Magee Builders
A few years ago this home development company focused primarily on higher end remodels of existing homes in the North Central area, replacing older systems, adding square footage and putting in those “luxury” items like granite countertops and wood floors that are so popular these days.

“Our finished product would be worry free for a buyer and have all the amenities of a new home,” explains Randy Rochford, a principal with Magee Builders. “As market demand and prices have increased, we have shifted to building new semi-custom spec homes on scattered vacant lots throughout North Central. We have found a big demand for 3,000-4,000 square foot homes in the $650,000 to $900,000 price range.”

He attributes the demand for higher-end new homes in the North Central area to families seeking quality homes in good neighborhoods.

“There has been a resurgence of existing Phoenicians and newcomers to the Valley wanting to live in city core,” he says. “Families want good schools, good shopping and great neighborhoods.­­North Central Phoenix is the best place to find all these amenities.”

Magee Builders has more than a dozen infill home projects in the planning stage at the moment, ranging in price from the high $600,000s to the high $800,000. But Rochford is confident the homes will sell, and fast.

“Our buyers love the way our homes are planned and designed to compliment historic Phoenix and are not worn out ‘McMansions’,” he points out. “We design a significant porch element on all of our homes to help encourage families to interact with their neighbors. It is very exciting to see the neighborhoods filling back in and children and families playing and socializing in their front yards.”

Rosewood Homes
One infill project that has such demand its homes are sold in a lottery draw is located at 33rd Street and Campbell Avenue. Built by Scottsdale-based Rosewood Homes, the 18-home development is called, appropriately, 33 Campbell Place. The homes range in price from $489,990 to $576,990 for the base model, which does include generous standard features like granite countertops.

“We’re always looking for special places, where there’s tremendous demand for new housing but very limited supply,” says David Kitnick, president of Rosewood Homes. “You have to find a piece of property that is being underutilized or used for some other purpose. Originally this was an older neighborhood house of worship whose membership base dropped off.”

Kitnick says he started to see the real estate market improve in late 2011, and his company approached the owners of the now-vacant land and made an offer. “It was an expensive property, but we knew there would be tremendous demand for a new home development in that part of town,” he recalls.

Kitnick was excited about the location because of its proximity to the Biltmore Fashion Center, and neighborhood hotspots like La Grande Orange and Postino Wine Café.

“One of the best things about infill locations is you already have the built-in infrastructure and amenity package,” he points out. “You have major employers, great restaurants and shopping, schools, churches, retail and more—right in the heart of the city.”

Thirteen of the 18 lots already have sold, and the first families were scheduled to move in last month. More home sites will be released this fall.

“I don’t like to build too many at one time,” Kitnick says. “We really manage the construction of each home carefully; we don’t want to rush through it.”

The sales office and models are open seven days a week. For more information, call 602-252-0088 or visit www.rosewoodhomes.com.