By Patty Talahongva
It wasn’t quite high noon on March 25, as Ted Lewis was sitting by his sewing machine while his friend, Job Ladd, sat nearby using Lewis’s computer to file his taxes. Suddenly, a woman burst into Lewis Interiors at 4320 N. 7th Ave., frantic and afraid as she tried to close the doors behind her. 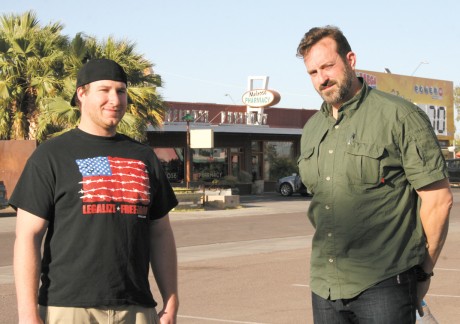 Phoenix residents Job Ladd, left, and Ted Lewis, who owns Lewis Interiors in the Melrose District, thwarted an armed robbery at Melrose Pharmacy on March 25. The men disarmed the suspect and kept their guns pointed at him until police arrived on the scene (photo by Patty Talahongva).

“She was screaming there was somebody with a gun,” recalls Lewis, the owner of the vintage interior design store in the trendy Melrose District.

The woman had been inside the nearby Melrose Pharmacy and escaped when a man pulled a gun out and demanded Percocet, a prescription narcotic painkiller. The owner of the store, Teresa Stickler, had been outside helping a customer when they both walked into the store as the scene unfolded. She had noticed the man earlier when he first came in but then he left. And when she saw and heard what was happening she pushed her customer back outside and ran next door to her husband, Kurt, who has an art studio space there.

“I told him to call 911,” she says, and then Stickler realized she had the keys to the safe where the drugs are kept. Incredibly, she went back into her pharmacy.

“The guy saw me and I said, ‘I have the keys.’ He told me to hurry up.” Stickler says the suspect kept his gun on her technician as she stuffed drugs into the bag the armed robber had handed her.

Meanwhile, Lewis grabbed his gun and gave his brother’s gun to Ladd. They didn’t hesitate. Lewis is former military and Ladd’s father was a police officer for 25 years. Ladd says they didn’t quite run but they headed out the back door, through the parking lot and crossed the street to the pharmacy. Just as they approached the door the suspect came out. Lewis came face to face with the man. His friend describes that tense moment: “Ted yelled, ‘Get down, drop it,’ and he went up and kicked the gun out of the way.”

They kept their guns pointed at the suspect until police arrived to arrest the man.

Inside the pharmacy Stickler thought police had arrived when Lewis yelled at the suspect as he went out the door. “Drop your weapon, I don’t want to shoot you but I will,” she says she heard Lewis yell. “It was so professional, I thought they were law enforcement, undercover.”

That was the first time she met her business neighbor. “We’re associated with them through the Seventh Avenue Merchants Association,” explains Lewis. “It’s a cool, tight-knit community. So when the customer came in freaking out the first thing we thought was, ‘We better go check on the pharmacy’.”

Once the incident was over, Lewis and Ladd’s hearts started to race. “I normally sweat doing anything,” says Lewis. “But I felt like during the time I was cool as a cucumber. I think we just reacted.”

Ladd says they wondered if what just happened, had really happened? But then reality came back and they resumed their work. Lewis had orders to fill the next day and Ladd still needed to finish his taxes.

“We were so thankful!” says Stickler, who gave each man a reward. “It’s good to have good neighbors like that.” They both say they appreciate the reward but it’s not what they expected. “Your sense of duty is to do something when someone is in danger,” says Lewis. “It’s not cool to rob small businesses.”

The suspect, James E. Johnson, 43, is a transient, according to court documents. He was booked on suspicion of armed robbery with a deadly weapon, and his bail was set at $75,000. Johnson, along with an unknown accomplice, allegedly robbed two other pharmacies the same day that he attempted to rob Melrose Pharmacy. He first struck J & J Arrowhead Pharmacy in Glendale, before attempting to rob Estrella Pharmacy in far west Phoenix. That robbery was thwarted by an armed store clerk, but Johnson managed to get away. His alleged accomplice is still at large.