By Teri Carnicelli
Shayne Smith is a motivated 25-year-old guy. When Smith was 4 months old he contracted meningococcal septicemia, a form of sepsis, leaving him with multiple amputations, including his legs, a hand and half of each finger on the other.

He always wanted to play basketball, and despite being told that he could never play, he started the game when he was 8 years old. It took him four years to finally score his first basket. But he didn’t give up, and he didn’t get down on himself. 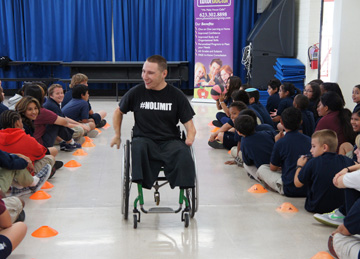 Smith eventually made it to the Wheelchair Basketball All Star Team, and has won awards for his skill.

Smith, a native of Canada, travels around North America speaking to kids and teenagers about everyone’s ability to overcome obstacles, and achieve the most seemingly impossible dreams. His presentations are part of “The Why Factor,” a nonprofit community outreach program sponsored in part by Tutor Doctor and created to spark inspiration in students, parents, and educators alike to help break through the barriers that hold them back.

“Since Shayne’s childhood he has consistently proved that people with disabilities can do anything that able-bodied people can, they just do it differently,” said Tutor Doctor President Frank Milner. “The goal of our sponsorship is to inspire everyone to realize a bright future through education by teaching individuals to be self-motivated and driven to reach their full potential.”

“Words are so powerful; why not say to ourselves, ‘I’m going to,’ instead of ‘I want to.’ Using positive words matters,” he pointed out to the middle schoolers. “We also don’t know what kind of things, good or bad, our peers are going home to every day. So why not make the time they spend with us as beautiful and awesome as we can by saying positive, supportive things to them.”