The Assistance League of Phoenix, a North Central nonprofit serving area low-income women and children, has been selected as a finalist to compete in Desert Schools Federal Credit Union’s Shine On campaign, offering a $30,000 grand prize.

For the next nine months, the six charities selected, representing different categories, will vie for the $30,000 prize provided by Desert Schools, with the winner being chosen by a public vote concluding in October. 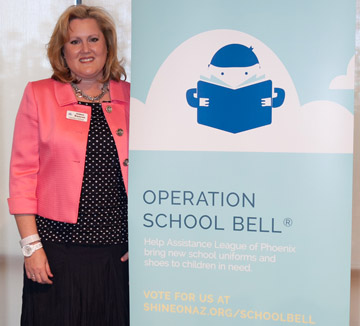 Aimee Runyon, executive director of the Assistance League of Phoenix, happily accepts a “starter” check of $7,500 from Desert Schools Federal Credit Union as part of the financial institution’s Shine On campaign (submitted photo).

“Through Shine On, we intend to spotlight those charities and projects that we feel best represent our values as an organization,” said Susan Frank, President and CEO of Desert Schools.

“These six finalists are making a real, positive impact in our communities and we want to help them further these projects by bringing awareness to the larger community as a whole.”

ALP and the other five finalists were each presented with a funding “boost” in January of $7,500 to initiate their project efforts. Throughout the year, the public will be encouraged to visit www.shineonaz.org to vote for their favorite participating organization. The Shine On website also will feature videos and updates from the contestants as they make progress on their spotlight projects.