A ‘wearable’ way to help charities

By Patty Talahongva
In Chico, Calif., there is a young woman who most likely has no idea how she’s impacting hundreds of special needs people in Phoenix … and around the world.

North Central resident Robert Thornton’s mother was a bus driver for special needs kids in the Chico area. Each day on the ride home, one young girl would spend the time drawing, giving Thornton’s mother her pictures.

Robert, a self-described T-shirt fan, recalls liking her art and thinking it would look good on a garment. Such are the humble beginnings of Thornton’s Paper Clouds Apparel, named in part for the first art projects most kids ever do—gluing cotton balls to construction paper for clouds in the skyline. 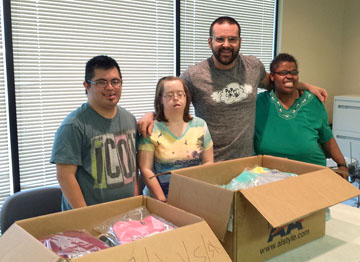 Robert Thornton, second from right, owner of Paper Clouds Apparel, gets help packaging up his T-shirts from special needs adults, from left: Antonio, Jennifer an Diamond. Last names are not used to protect their privacy (photo courtesy of Paper Clouds).

Thornton initially launched his website in early 2010 and teamed up with North Central nonprofit VALLEYLIFE, which is a not-for-profit organization providing services to individuals with disabilities. The agency, located at 11th Avenue and Hatcher Road in Sunnyslope, helps men, women, elderly, and children in the community by enriching their lives with opportunities to thrive in their everyday lives, through programs and advocacy.

VALLEYLIFE clients provided artwork and Thornton’s board of advisors selected the ones that were eventually printed on T-shirts, hats and totes and sold on the Paper Clouds website, with a portion of the proceeds going back to the nonprofit organization.

“My goal was to always go nationwide with Paper Clouds Apparel and help those with special needs all over the country—and hopefully eventually go global,” Thornton says.

The VALLEYLIFE program was the start of many collaborations to raise not just funds, but also self-esteem.
“We set campaigns up for two weeks per cause because that is the way that we can spread our mission all over and meet new people every two weeks,” explains Thornton. “Plus, by only offering our shirts, hats and bags for two weeks they are limited-edition and buyers can know that they have something rare and special.”

The first campaign of the new year, which runs through January 12, features the National Autism Association. The second part of the month will be a campaign for AbilityPath, which is part of Community Gatepath, one of the largest providers of services for people with disabilities in the San Francisco Bay Area. The campaign for AbilityPath will run Jan. 13-26.

Thornton also has worked with another Phoenix group, SEEDs for Autism, a nonprofit organization that provides vocational training, social skills, and life skills for adults on the autism spectrum.

“It was a great experience for us in several ways, as it allowed for our artists/participants to have the chance to see their own artwork on shirts, and it built great self-esteem,” says SEEDs Executive Director Mary Ann LaRoche. “We also were paid to help package the entire order for shirts that were sold. It is a wonderful thing to see enterprises working together in the community to bring opportunity to those who need a boost, and that is exactly what Paper Clouds Apparel and SEEDs seek to accomplish.”

Thornton is equally enthused about the partnership with SEEDs. “We envision a very long and successful relationship. Mary Ann is amazing and we love the work she is doing there and the skills she is teaching the members. I look forward to teaming up with SEEDs again in the future when we have grown and can really help them out.”

Others have seen the void Thornton is trying to fill and are helping him in various ways. “With the help of the amazing people at Seed Spot, a non-profit business incubator in Phoenix, I developed my idea further,” he points out. With their guidance, he launched an improved website a year ago. From that he met Marguerite Singson, the field marketing manger for KIND Snacks in Arizona. Singson encouraged him to enter a contest sponsored by KIND for small start-ups (www.kindprojects.com). And much to his shock and amazement, he won.

“We were competing against 79 other businesses for the $10,000 grant and the chance to be the first ever KIND Project,” says Thornton. “To vote you had to vow to do a kind act, like take your grandmother to lunch or help a neighbor with yard work, and over the month there were 18,000 kind acts vowed to be acted upon and almost 6,000 of those came from people voting for Paper Clouds Apparel. Votes came from all over, and the special needs community really got behind us.”

“Robert’s project, in particular, inspired more than 5,000 KIND acts out of a total of 18,000 for the month of November and we were glad to present him with the grant,” says Kristi Kleila, associate communications manager of KIND Snacks.

“The money is going to a revamping of our website that is going to really be a game changer for us,” explains Thornton. “The grant is dispersed over the next couple months and KIND is very involved with making sure it is used properly.”

Besides Thornton, the small Paper Clouds staff includes Sara McClellan, who he describes as a “jack-of-all-trades,” and intern Kara Langlois from Arizona State University.

“We have the ability to make this world a much better place for those with special needs by doing something as simple as purchasing a shirt,” Thornton says. “I just hope people will check us out on Facebook at Paper Clouds Apparel and visit our website at www.papercloudsapparel.com.”