By Patty Talahongva
For nearly 100 years, American Indian children were sent to the United States Industrial Indian School in Phoenix. Built in1891 at the corner of what is now Central Avenue and Indian School Road, the boarding school was a place to educate primary and secondary students. The government-run boarding school was approximately 3 miles north of the city’s downtown. 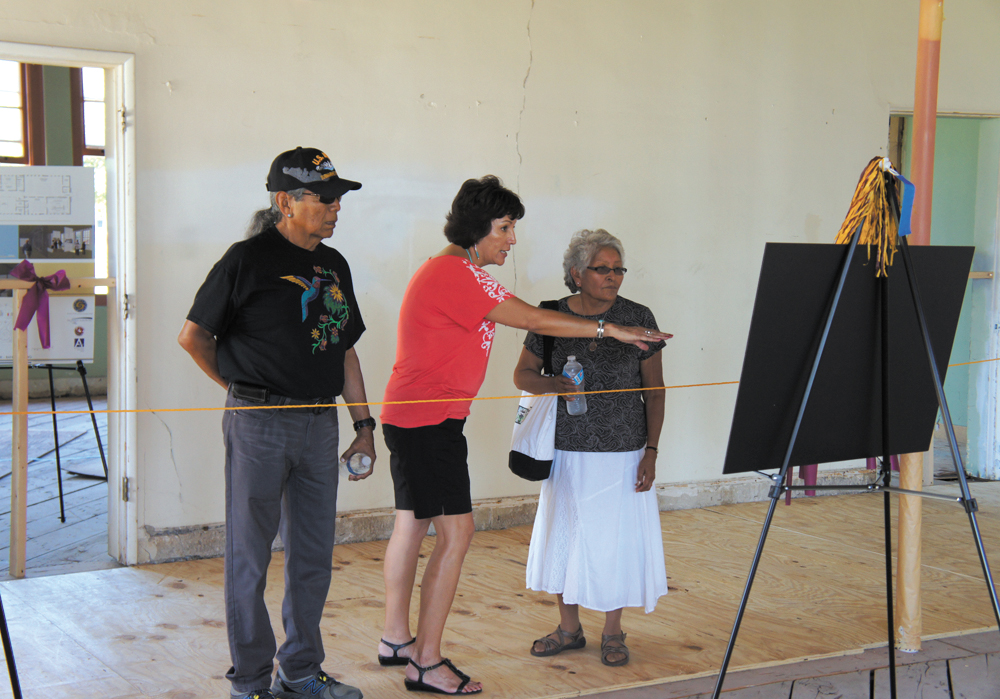 Lana Barrett, center, a volunteer with Native American Connections, explains plans for renovating the old band building at what was once the U.S. Industrial Indian School. Taking a tour of the building are former Indian School band students Leon Nuvayestewa Sr. and his wife, Evangeline, both of whom graduated in 1959 (photo by Teri Carnicelli).

In the beginning the children were forcibly removed from their homes and forbidden to speak their native languages. Their hair was cut and the traditional clothes they wore were replaced with clothes of Anglo people. After the U.S. government had failed to rid the lands of American Indians, they decided to assimilate them through education. “It’s cheaper to educate Indians than to kill them,” said Indian Commissioner Thomas Morgan at the opening of the school.

When the U.S. Interior Department closed the school in 1990 due to declining enrollment, the city of Phoenix acquired most of the property and turned it into Steele Indian School Park. The dorms and classrooms were all torn down, including a fairly new gymnasium, but three buildings were saved and placed on the National Registrar of Historic Places. The city of Phoenix restored Memorial Hall and today it is available for rent. The exteriors of the former Band Building and the Dining Hall were shored up and made safe but the interiors remain gutted.

It is the 600-square-foot Band Building that is the focus of a joint Legacy Project between North Central Phoenix-based Native American Connections and the Phoenix Indian Center. The two long-time Valley nonprofit groups want to turn the building into a Native American cultural gathering place and restore a Native American presence at the site.

“I’d like for it to be a historical avenue for all Arizona residents so they have some understanding of the important role the school played in the history of Phoenix,” says Diana Devine, CEO of Native American Connections.

The partners signed a Letter of Understanding with the city of Phoenix, on the auspicious date of 11-12-13, to do the renovations. It’s good for five years. Preliminary funding for the project has come from LISC Phoenix and Chase Bank. The partners are still raising funds for actual construction and operation costs.

“The city of Phoenix is committed to working with us in creating a space that pays tribute to the Phoenix Indian School and the people who were connected to it,” says Patricia Hibbeler, CEO of Phoenix Indian Center. “As I look out at the park (today), there’s no feelings or presence that Native people were here for nearly 100 years. You forget the buildings are there. The whole presence of 99 years is lost, forgotten—and that makes me very sad.

“The space is being created especially for the American Indian people and it’s being created by Native organizations and people,” points out Hibbeler.

“The Band Building is key to preserving the legacy of the Phoenix Indian School,” agrees James Burke, Phoenix Parks and Recreation Department director. “Its restoration and cultural programming will be a gift to Phoenix residents for generations to come.”

Architectural drawings include a gallery space that will feature the history of the school; a commercial kitchen that can be rented out to culinary entrepreneurs or used for catering events at the park; a large meeting space that can hold 120 people; and a smaller meeting room and a small business center. There also will be an area where tribes can promote tourism events.

Several tribes and organizations have sent letters of support for the project. An especially moving one came from the late leader of the Fort McDowell Yavapai Tribe. Dr. Clinton Pattea wrote, “Like many Native Americans, I am a graduate of the Indian School, and because of my education and learning experience there, I have been able to achieve great successes for our nation and Yavapai people for future generations.”

For more information about the project, call 602-254-3247 or visit www.nativeconnections.org.