When Terry Ratner’s husband, Michael, was diagnosed with esophageal cancer in 2008, she steeled herself for the fight of her life. Sadly, Michael passed away in November 2010. But Terry’s relationship with cancer was far from over.

After Michael’s diagnosis, Terry, a registered nurse, realized there was very little information out in the community about esophageal cancer. How did one find survivors, or family members, who had gone through the battle? How could she learn from their experience? 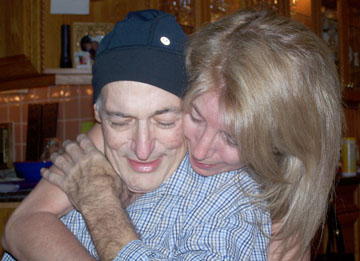 Terry Ratner gives a hug to her husband, Michael, just two weeks before he passed away from esophageal cancer (photo courtesy of Terry Ratner).

Realizing there was a void to be filled, Terry formed Arizona’s only esophageal cancer support group, holding meetings once a month at Banner Good Samaritan Hospital, where she worked. Helping others with shared information and experience was a way to help herself heal, as well, after Michael died. But last year, cancer once again hit close to home.

Terry was diagnosed with breast cancer in October after finding a small lump in her breast. Now it was her turn to battle.

She looked into whole-breast radiation, which typically takes seven to eight weeks to complete. Dissatisfied with that idea, she began to research other types of treatment and eventually came across Dr. Robert R. Kuske, a radiation oncology and pioneer of the “accelerated partial breast radiation” treatment, a five-day alternative to conventional whole breast irradiation.

She spoke with women who had undergone Dr. Kuske’s treatment and decided to do it for herself. “A lot of women don’t know about this option,” Terry says. “It pinpoints the cancer and targets just that area and nothing else, and in a much shorter time frame.”

She completed the treatment and so far, things are looking very good, Terry adds.

Just as Terry’s relationship with cancer has evolved, so, too, has the support group, which took a hiatus while she was undergoing treatment and recovering. Originally having an esophageal cancer (EC) focus, over the course of several months the topics were expanded to areas like art therapy, nutrition, detoxifying your home, and other discussions that would benefit anyone dealing with any type of cancer.

Now the group has been re-named the Cancer Support Group under the auspices of the Michael Ratner Community Cancer Support Association, which Terry is working on turning into a nonprofit organization. The next meeting is slated for 6-7:30 p.m. Thursday, Jan. 15, at its new location, Bink’s Midtown, 2320 E. Osborn Road, in the large meeting room. The guest speaker is Dr. Robert Kuske, who will talk about his groundbreaking breast cancer treatment method.

Admission is free and open to those fighting cancer, survivors, family members and other supporters. Complimentary refreshments will be served, however, seating is limited and an RSVP is requested by Monday, Jan. 12.