Bennie Gonzales is perhaps best known in the Valley of the Sun for his distinctive Southwest-style architecture. Some of his projects have included the Heard Museum (contributor), Scottsdale City Hall and the Scottsdale Center for the Performing Arts, and Christ Church of the Ascension in Paradise Valley. He also designed several homes in Central Phoenix, including the Casa Del Northern condominium development, built in 1966. 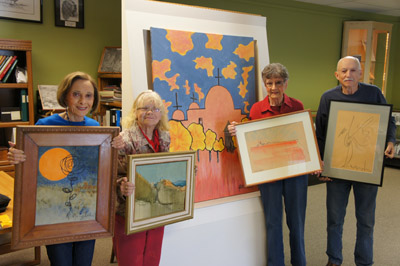 Displaying some of the artwork by Bennie Gonzales that will be available for purchase at the Sunnyslope History Museum this month are Sunnyslope Historical Society members, from left: Bobbie Kraver, Donna Peterson, Connie Kreamer and Richard Solem (photo by Teri Carnicelli).

But a growing number of people are becoming fans of a passion he found later in life—art.

Some of his works will be on display during a special exhibit and sale at the Sunnyslope History Museum from April 9 to May 1. The exhibit will open to the public during the annual Palo Verde Festival at the museum, 737 E. Hatcher Road.

Johanna Haver, Governing Board member of the Maricopa Community College District, will talk about Gonzales’ life and works beginning at 10 a.m. inside the museum.

The exhibit is co-sponsored by the 639 Grand Gallery in Nogales, Ariz. The selection of paintings and sketches are from the private collection of Diane Gonzales, Bennie’s widow.

Gonzales was born in 1924 in Phoenix and died in 2008. He was a graduate of Phoenix Union High School and Arizona State University, where he was one of the first to receive a degree in architecture. Gonzales always admired art, particularly the works of Pablo Picasso, as can be seen in his own impressionistic paintings and sketches.

As part of the festival, there will be live music in the Centennial Courtyard and light refreshments. Admission is free, however, monetary donations to the museum are gratefully accepted.

Gonzales’ paintings and sketches will be available for purchase, however, buyers must agree to allow them to stay up until the exhibit closes on May 1. A portion of the proceeds will benefit the Sunnyslope History Museum. The museum’s hours are 10 a.m.-3 p.m. Thursday through Sunday. For more information, call 602-331-3150.