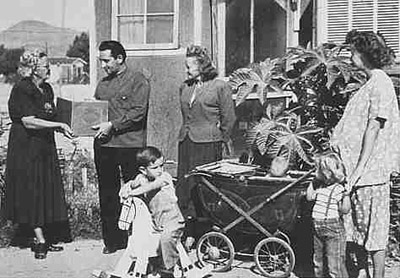 Marguerite Colley, who moved with her husband and asthmatic son to Sunnyslope in 1919, was a practical nurse and a social worker. She soon began visiting her sick neighbors bringing food and aide to their bedsides (photo courtesy of the Sunnyslope Historical Society).

Dr. Tom Poulton, a pediatric specialty physician, and Reba Wells Grandrud, an academic historian, are doing background research for a book,  “The Kids of Sunnyslope,” which will tell the stories of children who grew up in the Sunnyslope tuberculosis community’s open-air tents, cabins, and cottages in the pre-antibiotic era, from 1890 through about 1945.

Many Arizona communities welcomed people from the East Coast and Midwest who were battling tuberculosis. There was some evidence that Arizona’s dry, hot climate might help them recover. Most of the afflicted were young or middle-aged adults. Many brought their families, including their children, to the warm and sandy Sunnyslope flats and hillsides.

“The Kids of Sunnyslope” will tell the stories of the children who endured a hardscrabble and uncertain life, as well as those who labored to help them. Some of the children had tuberculosis themselves; all had a very ill parent whose fate they feared to predict.

The authors want to hear from anyone who lived through that era or knew those who did. Perhaps your parent or other relative was one of those kids. They also want to talk with anyone who knows a relative who worked with those kids—a teacher, nurse or nursing assistant, clergy, or church member who did outreach.

Old photographs, letters, diaries, or any recollections you may have are all of great interest. Contact Poulton by e-mail: tpoulton@gmail.com.