By Patty Talahongva
Driving north on 16th Street just past Indian School Road, it was easy to miss the tan building on the east side that has been the home of Drumbeat Indian Arts since 1972. It was easy. Not anymore.

Owner Bob Nuss explains that earlier this summer he received a phone call out of the blue. “I didn’t know her,” he says of Jeanette Rocha, who called and asked if she could paint a mural on his wall. “It was just an intriguing idea. 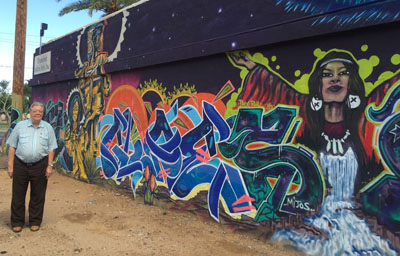 Bob Nuss, owner of Drumbeat Indian Arts, stands in front of the new mural painted by some volunteers on the side of his once drab building (photo by Patty Talahongva).

“If it didn’t turn out I could repaint the wall,” he recalls with a chuckle.

He gave the green light and Rocha showed him some sketches and they decided on the images that would be painted. And then Rocha called in her paint crew. Rocha is from an Indigenous tribe in Mexico. Her crew of artists came from the Valley but also from places such as Chicago, San Francisco, and from tribes such as the San Carlos Apache, Navajo, Yaqui and Pima.

“The whole idea came from our traditional cultures, matrilineal lines,” Rocha says. The wall is covered with images of women as leaders, as caregivers, lifegivers, and artists. The mural project is titled: Reverberate Her Lines.

“Don’t forget women are the backbone of our communities, our families,” Rocha points out.

Nuss watched the crew of about 15 people turn his tan wall into a vibrant mural depicting female power and traditions. Exterior house paint was used for the background but each image is meticulously created with spray paint. Rocha got all the paint supplies donated. The team completed the mural in May.

“Oh, it was impressive,” Nuss says of watching the group transform his wall. Quite a few people driving by also were captivated and turned around to come back and watch them paint. “Everybody got enthusiastic.”

Now that the mural is completed it is drawing in a few new customers who notice the store for the first time. Drumbeat sells Native American clothing, jewelry, music, blankets, and a whole host of items to make Native American regalia. One staffer, Valerie Francisco, says people tell her they’ve always driven right by the store—until they noticed the mural. She says they are amazed once they enter the store, which is just as colorful with its array of Native arts, crafts and more.

“They took the colors in the store and put them on the wall,” says Valerie Harris, a long time manager. It’s a bonus that the mural has translated into some additional sales for the store, which is open 9 a.m.-5:30 p.m. Monday through Saturday. For more information, call 602-266-4823.