Austin died in May on his way to Sunnyslope High School, where he was a sophomore. He was waiting for a city bus when a two-vehicle accident at the intersection of Glendale and Central avenues went off the road and hit him. He was a member of Troop 329. 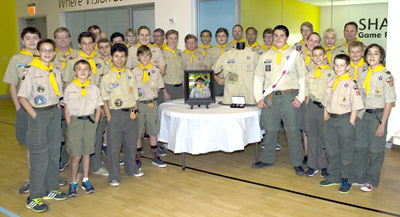 Celebrating the awarding of the Eagle Rank, given posthumously to Austin Lipko-Benito, are members of Boy Scout Troop 329 at the Foundation for Blind Children facility, the beneficiary of Austin’s Eagle project. With them are framed photo of Austin, his uniform shirt, and his Eagle patch and award (submitted photo).

Albeit unusual, the Boy Scouts of America has procedures in place to award a Scout the Eagle rank if he had already completed all of the requirements prior to death. “In his case, Austin had completed everything that he needed for this rank, except to complete and turn in his final paperwork,” said his assistant Scoutmaster, Bruce Brown.

“He had completed all of his merit badges, his service requirements and had done his Eagle Project at the Foundation for Blind Children by relocating their Braille library. We could not let this honor not be awarded to Austin’s family after all he had done.”

The Braille library move from the old Foundation for Blind Children (FBC) building to the adjacent new building required about 500 boxes, and Austin went out and secured the donation of the necessary boxes from a local company. It also required organizing the packing of all the books in a manner that facilitated all of them being re-shelved in the appropriate categories.

The books were boxed, loaded onto trailers and moved to another location for storage while the old library facility was demolished. Austin’s project also included dismantling all of the bookshelves and organizing the associated pieces so that they could be reassembled at the new library facility.

At the ceremony to honor his achieving the highest honor that can be received by a Boy Scout, Austin’s former Scoutmaster, Chad Trott, spoke of his giving spirit and gentle character. “Austin embodied every day of his life the Scout Laws of trustworthy, loyal, helpful, friendly, courteous, kind, obedient, cheerful, thrifty, brave, clean and reverent. You could not have found another young man who gave as much as Austin did to his family, his Church, his school and his Troop.”

Austin’s Eagle badge was awarded to his mother, Gina Lipko, and his father, Benny Benito, at a well-attended ceremony at the Foundation for Blind Children’s gymnasium. With more than 100 hundred friends and family in attendance, Lipko acknowledged how much this award meant to her and the family because scouting had been such a huge part of Austin’s life growing up.

Austin is Troop 329’s 229th Eagle Scout recipient and the first to receive this honor posthumously from his troop.