Officer retires after 30 years on patrol

By Patty Talahongva
After 31 years, three months and six days on the job as an officer with the Phoenix Police Department, Emma Nez turned in her badge and bid her fellow officers farewell on June 30. “My plan was to put 30 years in,” she says. “I was done.” 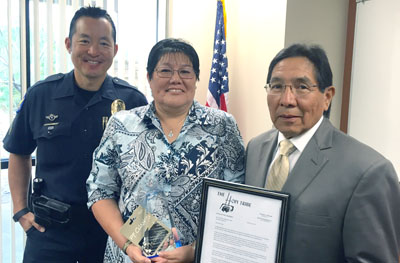 A longtime North Central Phoenix patrol officer, Nez was well liked as evidenced by the packed room at her retirement party, with many people standing in the back of the community room at the Mountain View Police Precinct. She laughs easily and peppers her comments with funny jokes or remarks. She asked Sgt. Steve Ong to serve as the Master of Ceremonies. “He knew me the best,” she says of her former boss.

Ong read a list of Nez’s achievements: she patrolled North Central Phoenix as part of the Neighborhood Enforcement Team (NET) for the bulk of her career; she also provided security for three presidents and two Super Bowls; and she’s received 111 commendations for her superior work.

“I enjoyed my time in the area,” Nez says. “The people I dealt with, talked to, are really nice and friendly to the police department.”

Ong also noted, Nez is extremely healthy having never taken sick leave in at least the last 20 years. She worked undercover with skill and finesse, flushing out perpetrators with her partner. She also helped people she met in her daily patrols and was part of the Secret Santa group handing out cash to anyone who caught her attention and obviously needed a little help around the holidays.

Nez is Hopi from First Mesa. The tribe has several clans and each one has certain roles and responsibilities. The chairman of the Hopi Tribe, Herman Honanie, attended her retirement party and presented her with a plaque honoring her years of service. He noted that the men of her clan are guards of the village. “You showed up your men,” Honanie said, and went on to say he hoped her relatives were proud of her.

Her last partner, Officer Ken Harbaugh, said a day never went by which Nez didn’t tell him about her tribe, her clan and her family, to the point where Harbaugh joked, “I was envious and jealous.” He says she is very proud of her Hopi heritage. He also noted her ability to handle inebriated people on the street and to figure out how to take out drug dealers without violence.

“You are a great cop. I’m proud to serve to have served with you all these years,” said Harbaugh.

Now that she’s taken off her badge, Nez is contemplating her next phase of life. Community service work is on her list. No job means being able to finally watch her granddaughter compete in some cross country meets.

She plans to keep active in the community she patrolled for so long. And she looks forward to finding out what opportunity comes next because, as she says with a laugh, “You can only clean the house so much.”