Home / Community / Pet of the Month: Best buddies need a home together

Pet of the Month: Best buddies need a home together 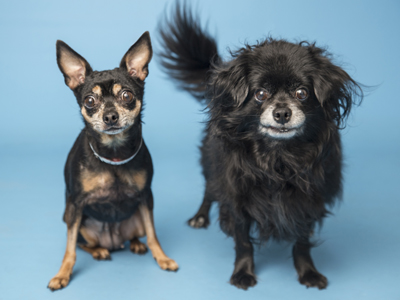 These best friends came to the shelter after their owner passed away, and are seeking a forever home together (submitted photo).

Though small, these two canines pack a lot of attitude per pound. Taz is the leader and risk taker who throws himself into any situation with an eagerness to investigate and explore. The 7-year-old Pomeranian often leaps before he looks, especially when treats are involved.

On the other paw, Digger is wise and distinguished at the age of 8 and the Miniature Pinscher acts as though he’s only a day away from retirement. Digger is a dog who lives by-the-book and likes to play it safe by occupy someone’s lap or being toted around under your arm. When he’s feeling frisky however, he will play a few rounds of fetch. Digger often beats Taz to the punch but allows his Pomeranian comrade the honor of taking the ball back to their master.

The two dogs have spent most of their lives together and practically know each other as well as a married couple but ended up at the Arizona Humane Society after their owner passed away.

Taz and Digger are on the Buddy System and are available at the Sunnyslope Campus, 9226 N. 13th Ave. Their adoption fee together is $150. For more information, call 602-997-7585 and ask for animal numbers A539599 and A539601. They may have been adopted by the time you visit the shelter but there are hundreds of other pets in need of a home. Visit www.azhumane.org to see them all.