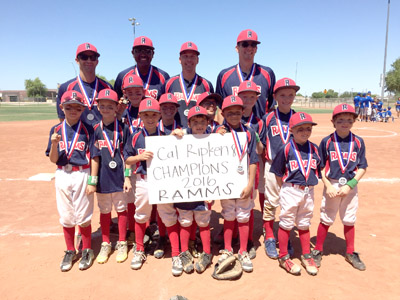 Players and coaches of the Recreation Association of Madison Meadows-Simis (RAMMS) 8 and Under celebrate their win at the Cal Ripken 8U State Championship game on June 12 (submitted photo).

The Recreation Association of Madison Meadows-Simis (RAMMS) 8 and Under team won the Cal Ripken 8U State Championship on June 12. The RAMMS 8 and Under beat the Yuma Blue team by a score of 9-5 in the championship game in Yuma..

The Cal Ripken tournament included eight teams from Scottsdale, Casa Grande and Yuma. The RAMMS 8U went undefeated with a 6-0 tournament record. The team outscored its competition 100-15 in total runs.

The team is managed by Gregory Simpson, and coached by Darren Desmond, Thomas Griffin and Wes Richardson.