32 Shea is a tiny but mighty café

By Patty Talahongva
It’s official: 32 Shea is five years old, a healthy age in the restaurant business and owner Rebecca Golden couldn’t be more proud. After saving for a decade, she made her dream a reality. Her vision is etched in every detail of her small and vibrant business.

Located at the northwest corner of 32nd Street and Shea Boulevard, the aptly named business has two distinct identities.

“It’s a café by day and a bistro at night,” explains Golden. Coffee, tea, breakfast foods and smoothies are offered first thing in the morning, with a lunch menu featuring salads, wichcraft (sandwiches) and soups. After 4 p.m. dinner is served with an “entrée of the moment” offered after 5 p.m. For such a small space, the bar offers a robust selection with spirits,  many local wines and beers. 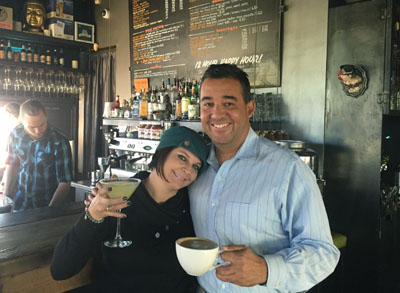 Rebecca Golden and one of her many regulars, Carlos Arboleda, show off two of their favorite drinks: for her, a Mint Lemondrop Martini, and for him, his regular cup of mocha. 32 Shea is both cafe and bistro depending on the time of day (photo by Patty Talahongva).

Golden admits that when it came to creating her menu, she did her own research. “I just went to all the places I love and picked out items.” And at the start she did the cooking. But chefing up a storm is not her forte, so a few years ago she hired Theresa Wille, who has added her own touch to the menu like the lobster mac and cheese.

Wille has also added curried salmon and turkey sliders. And since the kitchen doesn’t have a deep fryer, everything is baked in convection ovens.

Little hearts next to some items on the menu indicate a favorite dish, while the OMG wichcraft (prosciutto, figs, mascarpone and honey) has a helpful “yummmmmmm” added to the name. And you can’t miss the “So Freakn’ Good” description by the juicy roast beef wichcraft. Both are served with chips for $8.

32 Shea was the first in the Valley to offer a cold Nutella Toddy drink ($4.40 for a large), which has become a customer favorite. The cheesecake desserts are made in house and Golden offers a 12-hour happy hour starting at 6 a.m.

It’s all part of the quirkiness of 32 Shea and the owner, who grew up in southern New Mexico.

The New Mexico burrito and green salsa are a nod to her roots. “It’s garlicky and it’s yummy,” she says.

Golden is still finalizing the Valentine’s Day  menu, which will include four courses for $55; if you elect to have cocktails paired with the dinner, the price is $75. She recommends reservations for this special night; call 602-867-7432.

Golden would like to build up her catering business and has a separate menu for those orders. Right now it’s strictly a pick-up service for groups of all sizes. In fact, 32 Shea has an actual drive-thru window where you can order ahead and get your food without leaving your car, or you can drive up and order a coffee.

As the weather warms up, the patio is a popular place, with lots of shade from trees. It’s also a dog-friendly space complete with a fire hydrant and a hose to fill one of the many water dishes. And it’s group friendly, too. Several groups meet at 32 Shea on a regular basis: mothers groups, book clubs, yoga groups and more come to relax and enjoy the patio. There is no charge for groups to meet during the day but in the busier evening hours after 4 p.m. there is a $20 per person charge when you make your reservation. The fee is put toward the food-and-drink tab.

“I enjoy the people coming in, the sense of community,” Golden says. “People make friends here.”

People can continue the conversation on social media as Golden posts specials on Facebook and Twitter. 32 Shea also offers free Wi-Fi. Regulars may use a punch card to earn free cups of coffee.