By Patty Talahongva
Joe is back and this time he’s serving more than liquor.

Longtime North Central residents will fondly remember heading to Joe’s Drive Thru Liquors at 6101 N. 7th St. for a favorite beverage. It was first built in 1961 and through the years other businesses have occupied the spot, each keeping Joe in the name—except the last one. Now, Rick Cordova has brought Joe back with his restaurant infused with the essence of the 1980s and ’90s. 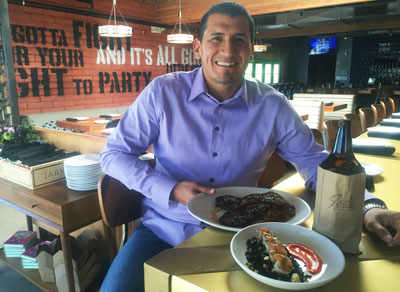 Rick Cordova, owner of Joe’s Midnight Run, shows off some of the customer favorites including the Shrimp Arroz Negro, and the short ribs cooked Korean style. Patrons who order 40-ounce bottles of beer find them delivered in brown paper bags (photo by Patty Talahongva).

Joe’s Midnight Run lives up to its name, serving much more than bar food until the wee hours of the morning. Where else can you order bone marrow, skirt steak and short ribs cooked Korean style anywhere near midnight? “You should still be able to get good food later in the evening,” says Cordova, who is from Chicago. “Phoenix deserves it.”

This is his first venture into the vibrant, locally owned restaurant business. He owns his own construction company and was originally planning to tear down the building and turn it into a parking lot for another restaurant he’s building right next door. But when he took a second look at the place, a huge wave of nostalgia kicked in. He learned about the history of the building and loved the original brick wall hidden by years and layers of paint.

Instead of tearing it down, Cordova decided to build it up into his own version of ’80s and ’90s nirvana, with food inspired by cuisine around the world.

From the time you park your car and walk into Joe’s, you’ll see popular lyrics painted on the wall, and inside the atmosphere is loaded with old time goodies like ’80s and ’90s movies playing on the flat screens, music (slightly edited for young ears) playing overhead, and your check delivered inside a real Garbage Pail Baby book. “That’s all the stuff I like,” Cordova says of the era.

But it’s the food that’s the kicker. “I love to grill. I grill every weekend,” Cordova says of his own personal habit. So he decided to install a wood-fired grill in his restaurant kitchen. All the food is cooked on that grill. Well, 95 percent of it; there is a gas fryer. “We put it in reluctantly,” he admits.

At lunchtime you can get a Sloppy Joe ($10) or smoked salmon ($18) and pair it with locally sourced craft beer, wine or, just for kicks, a bottle of Boone’s Farm Sunshine Pink or Blue Hawaiian ($8). Of course there also are plenty of non-alcoholic drinks. There are five salads on the lunch menu, including a watermelon salad and a shrimp Caesar salad, ranging in price from $7 to $9.

The dinner menu offers curried cauliflower ($7), bone marrow ($14) and arroz negro ($14) as small plates to share. Four salads also are available and reasonably priced from $7 to $15.

“We like to think we’re offering fine dining in a casual environment,” explains Cordova, who also credits his Executive Chef, Michael Goldsmith, who helped to create the menu of foods prepared in global styles.

Cordova does have his favorites, such as the grilled pulpo, which is octopus cooked in garlic and paprika oil, and served with fingerling potatoes. “It’s a must try,” he says.

The Monday special is a burger and a beer for $10 and you have to see the burger to believe how big it is. A dessert favorite is the tarte, which Cordova describes as an upside-down apple pie.

While the whole family can enjoy Joe’s Midnight Run, after 9 p.m. the lights are turned low and the music is cranked up and as it reads on the menu, “Parental Advisory, explicit lyrics after 9 p.m.” And you can drink from a brown paper bag. “Some people do pitchers, we do bottles,” Cordova says of the 16-ounce and 40-ounce bottles served in brown paper bags stamped with a music icon from the era, as well as the Joe’s logo.

A bicycle rack is available for people who can ride rather than drive to Joe’s. The patio is non-smoking and dog friendly. The comment card asks you to rate them on a scale of “Lame” to “Dope.” It even asks what is your favorite movie from the ’80s or ’90s so it can be considered for a future screening.

In October, Joe’s will host a fundraiser for breast cancer research. Check the website or Facebook page for details.