By Teri Carnicelli
The Phoenix City Council has unanimously approved a Planned Unit Development (PUD) application for 130 acres in and around the iconic Metrocenter Mall development, located on Interstate 17 between Peoria and Dunlap avenues. The new zoning allows for multiple new uses besides retail, such as office, senior housing, multifamily housing and healthcare. 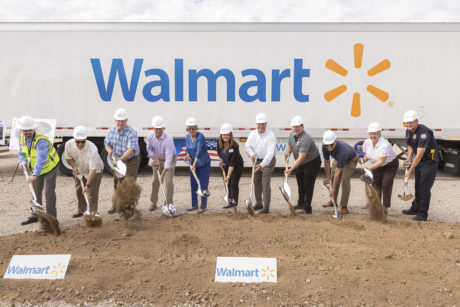 Officials with Walmart, the city of Phoenix and Carlyle Development Group—along with area business leaders—were on hand July 20 to conduct a ceremonial groundbreaking for a new Walmart Supercenter. The project represents the single-largest capital investment in Metrocenter Mall in decades and will open in Spring 2017 (submitted photo).

It also allows for increased height and density at the infill site, which boasts the highest surrounding residential density in all of the metro Phoenix market.

The PUD encompasses 130 acres, with 83 acres of that occupied by Metrocenter Mall, the adjoining Macy’s and Sears anchor spaces, and the 10-acre land site of a future Walmart Supercenter, which broke ground on July 20 after months of demolishing and clearing the old Broadway location, which had been vacant since 2006. The mall was first opened in 1973.

“This is a landmark moment that we have been working toward for quite a long time,” said Warren Fink, COO of Carlyle Development Company, the owner of Metrocenter Mall. “After several years of collaboration with the city, the community and its leaders, we now have the official green light to redevelop this valuable infill site in a very significant way, first and foremost by bringing in dynamic new uses that will make this a true urban village for Phoenix residents.”

Under the PUD, approved uses at Metrocenter could range from senior housing and multifamily housing to corporate office, healthcare and additional retail, restaurant and entertainment amenities. The PUD allows for a height increase up to 180 feet (approximately 15 stories). It also allows Carlyle to almost double its current 800,000 square feet of existing space, to a total 1.6 million square feet. The PUD additionally includes an amendment to the sign ordinance, allowing construction of three electronic billboards along I-17 between Peoria and Dunlap avenues.

“I grew up just a few blocks from Metrocenter, which has been an important part of my life and the lives of so many other Phoenix residents,” said Mayor Greg Stanton. “It feels good to help this area maintain its vitality as one of our Valley’s most important and recognizable retail and employment areas.”

“The zoning designation for this project was unanimously supported by the Village Planning Committee, Planning Commission and Phoenix City Council, a clear message that our community is anxious to see this development plan move forward,” said Phoenix Councilwoman Thelda Williams, in whose district Metrocenter is located. “Many people have worked hard to move this project forward and the end result will be such an asset in our community.”

The balance of the PUD—approximately 45 acres—encompasses land and businesses around the mall loop road, such as Castles-N-Coasters, College of America and the former Sports Authority big box.

“Our objective is to develop projects that respond to market demand and that reinvigorate this land site as its highest and best use,” said Fink.

Other benchmarks on the horizon include the extension of Light Rail to the Metrocenter site. That on-property Light Rail stop is expected to be open and operational by 2023.