By Teri Carnicelli
As District 3 City Councilman Bill Gates prepares to resign his seat at the end of this month to take aim at a county board seat later this fall, many community leaders, neighborhood groups and business owners look back on the impact he has had in the area in the last six-plus years, and wonder if his replacement will be as active as their outgoing representative. 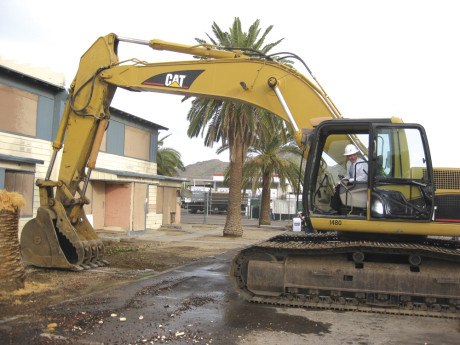 Phoenix City Councilman Bill Gates, with some advice from demo expert Travis Witt of Contractors Abatement Services Inc., gets to be the first to smash the former Sunset Manor Apartments in Sunnyslope, also known as “The Barracks,” which were demolished in November 2010 after the city acquired the blighted, boarded up property with federal Neighborhood Stabilization Program funds (photo by Teri Carnicelli).

“During the course of my career in public service I have worked for a former mayor of Phoenix and three former council members and can confidently state the most important traits to look for in a local elected official are a commitment to community outreach, ensuring business retention and expansion to widen the economic base, and supporting public safety,” said Tony Motola, president of the Sunnyslope Village Alliance. “Over the past seven years, Councilman Bill Gates has checked all these boxes and been a true advocate for District 3 and the Sunnyslope Village in particular.”

Gates first ran for the Phoenix City Council in 2009, when Phoenix was in the midst of the recession crunch.

“People were losing their jobs and their homes,” Gates recalls. “Our city budget was not structurally balanced and we faced huge challenges. I ran for City Council because I wanted to help ensure Phoenix remain the type of vibrant city that my daughters (at that time, 8 and 5 years old) would want to live, work and raise their families in once they became adults.”

Gates acknowledges that being a city council representative for him meant a 24-hour, seven-days-a-week job. “Every day (including on the weekends), I will have a conversation with someone about how to improve our city.  Every day I drive around District 3, I see things that can be improved upon.”

Gates was on-hand for many events and activities in his district, whether it was driving a CAT to help tear down the blighted apartment complex known as “The Barracks,” mixing up some Non-Partisan Ale at North Mountain Brewing Co., dedicating the history marker for “S Mountain,” helping to cut the ribbon on the new Walmart Neighborhood Market, collecting toys for Betty’s Kids at Christmastime, and dozens upon dozens more personal appearances.

“Bill not only recognized the need for revitalization along major business corridors in Sunnyslope, he went the extra mile to participate in special events with our local businesses, giving up many evenings and weekends to stand beside us,” Motola said. “He always understood Sunnyslope had its own community-based identity and sense of place and took on the role of ambassador for the area, sharing with stakeholders from throughout Phoenix the unique characteristics of what is one of the most diverse neighborhoods in Phoenix.”

Gates also has been lauded for the work he did behind the scenes, including his work with the city’s Finance, Efficiency and Innovation Subcommittee, his redevelopment efforts with community and business groups in the 32nd Street Corridor and Hatcher Road areas, and more.

“I am incredibly proud of all the redevelopment efforts we have been able to accomplish,” he says. “I’m proud of achieving over $105 million in reoccurring savings through innovations and efficiencies, protecting the unique character of neighborhoods, making sure our first responders have the resources necessary to keep the public safe, and so much more.

Gates hopes to continue the progress being made by serving the wider community as a representative on the Maricopa County Board of Supervisors. The primary election is Aug. 30, and if there is no majority winner, it goes to the general election on Nov. 8.

Andy Kunasek, who has served as a Maricopa County supervisor for 19 years, is retiring at the end of his term later this year. “Andy has been a mentor to me and I respect him tremendously,” Gates said.  “When Andy announced his retirement, I was encouraged by friends to run for county supervisor. Andy and I have very similar philosophies when it comes to government.”

Gates said that at the county he would continue his efforts of fiscal responsibility, promoting economic development, focus on public safety and support for county parks. “I believe my experience from seven years of service on the Phoenix City Council can benefit Maricopa County—especially our innovation and efficiency efforts.

“I think District 3 is in a good place and I cannot emphasize enough that I am not going far. When I am elected to the county, I will continue to represent all the people who currently reside in Phoenix Council District 3.”

Gates said he plans to resign May 31. The City Council must then appoint someone to fill his seat until a special election is held to determine who will serve the remainder of his term through 2019. The City Council is scheduled to make that appointment in June.

“Bill Gates has been a personal friend of mine for many years, and someone who I have enjoyed working with on the City Council,” said Phoenix Mayor Greg Stanton. “I admire his intellect, appreciate his integrity, and believe he sets an example on how to disagree without being disagreeable.  Bill is a class act, and we will miss him when he leaves our City Council in May.”