“The opening of the Northwest light rail extension will ease travel to school, work and entertainment,” said Phoenix Mayor Greg Stanton during a public event on Dec. 10, held to announce the opening date. “With the additional 3 miles of track, riders have access to a 26-mile system, making connections from Dunlap Avenue to downtown Phoenix, Tempe and into the heart of Mesa.” 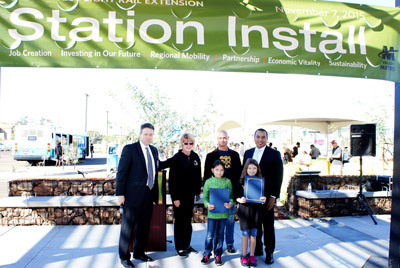 Avril Nevarez Loya (front left) and Laura Page, both students at Richard E. Miller Elementary, were honored for their original artwork that was used at the new light rail station at 19th and Dunlap avenues as part of the Station Install event on Nov. 7. Congratulating the two 9-year-old girls are, from left: Paul Stanton, superintendent for the Washington Elementary School District; District 1 Councilwoman Thelda Williams; Matthew Salenger, the artist who design and created the central gathering place with yellow cone-like installations; and District 5 Councilman Daniel Valenzuela (photo by Teri Carnicelli).

Stanton and Vice Mayor Daniel Valenzuela announced the opening date at a milestone event to celebrate the final phase of the new extension, which includes vehicle testing and safety awareness. It was the second event held in relation to the Northwest extension.

On Nov. 7 the city of Phoenix and Valley Metro hosted a “milestone celebration” at the Dunlap station and park-and-ride, featuring the artist who designed and fabricated the metal structures and some of the local elementary students who contributed to the art installation. There also were raffle prizes, bounce houses, crafts and music provided by a local radio station.

“With the project 90 percent complete, final touches are being made to the stations including landscaping and the addition of unique public art, which reflects the local community,” said Phoenix Councilmember and Valley Metro Rail Chair Thelda Williams.

Matthew Salenger and his wife, Maria, were the local artists who designed the bright-yellow metal art structures that drop down from the roof of the station plaza’s canopy. “It’s all about the sun, one of our most abundant and natural resources,” he said. Each yellow cone-like feature has a cutout disc at its base that creates different shadow patterns on the cement below with the movement of the sun above.

Salenger invited more than 300 students from five area schools to submit their ideas for the cutouts, with a theme of how they would re-imagine their own schools. Ideas that came in included schools that offered nothing but sports classes, a school that looked like a butterfly, and a school that could take off into the sky.

“I chose the most common themes and incorporated them into the design of the nine yellow cones in the plaza,” Salenger explained.

Two students from Richard E. Miller Elementary School—Avril Nevarez Loya and Laura Page—were honored at the Nov. 7 event for their artistic ideas that inspired two of the cones. The cones were constructed by Southwest Fabrication.

Valley Metro began vehicle and system testing in mid-November on the Northwest light rail extension, preparing for the safe start-up of revenue service. As part of testing, trains are moving periodically along the extension route. Valley Metro also will test vehicle clearance at stations, the overhead electrification system, traffic signal coordination and the switches that allow the trains to move from track to track.

Valdivia said the city anticipates an additional 10,000 riders per day from that 3.2-mile extension, which will connect six schools, several places of worship, senior living facilities and approximately 300 businesses, as well as the Abrazo Central Campus (formerly Phoenix Baptist Hospital). “This will provide another massive economic boost for District 5 and Phoenix and provide a crucial connection for thousands to the entire Valley.”

The contractor, Sundt/Stacy and Witbeck Joint Venture (SSWJV), continues to make finishing touches on the three new light rail stations at Glendale, Northern and Dunlap Avenues, and the park-and-ride lot just west of 19th Avenue off Dunlap. The roadway is also taking shape. It is expanded to its final configuration and new sidewalks, curbs and gutters are installed.