By Teri Carnicelli
Ten years ago next month, then-Phoenix Councilman Tom Simplot made a special trip to the up-and-coming Melrose District to perform a ribbon cutting for three new businesses. It was a special day not only for the shop owners, but also for an area that had battled blight, crime and vacant buildings for many years. 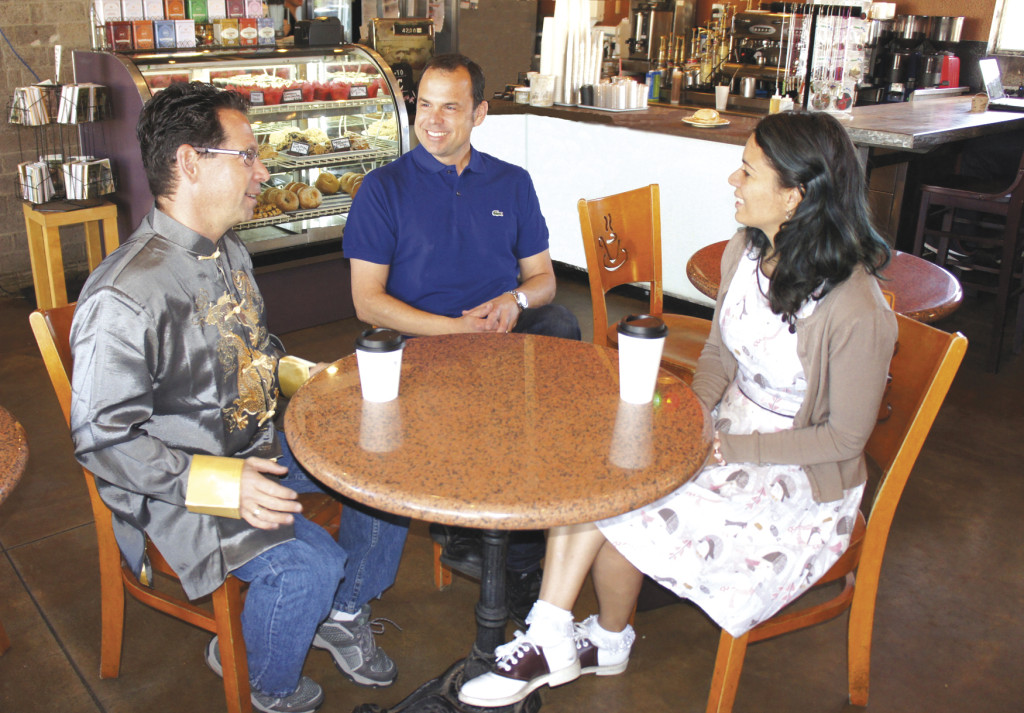 Flash forward 10 years, and the area is a vibrant, eclectic community that draws shoppers from around the Valley and celebrates its success with a popular annual street fair, which takes place this year on March 5.

Those three business owners—Jon Douglas of Figs Home & Garden, Bill Sandweg of Copper Star Coffee, and Teresa Stickler of Melrose Pharmacy—say they are proud of their success and the community, which only continues to get better.

“The changes in the Melrose District have been amazing,” said Douglas, who buys décor and home furnishings from around the globe to sell in his store. “I think the biggest change is how the district has become an extension of the North Central corridor and with a lot of branding it has become a destination point.”

Stickler’s business has grown from a small shop with two employees to a much larger storefront with 13 employees. “Our loyal customers are what has helped us survive through the recession,” she says. “I think of Melrose District as a small town within a big city. Everyone is connected to each other by some way. Our area is really supportive of locally owned businesses.”

Part of that support comes from the Seventh Avenue Merchants Association (SAMA), which formed in 2001 for the express purpose of promoting local businesses to the larger Valley area and attracting new businesses to the Melrose community.

“There is no substitute for being active in the community,” said Sandweg, whose popular coffee shop has continued to find success event while competing against nearby national retail chains with huge marketing budgets. “I was the president of the Seventh Avenue Merchants Association, on the board of Pierson Place Historic Neighborhood, president of the Madison Heights PTO, and I’m a member of the City of Phoenix Environmental Quality Commission. Being out in the community helps me stay in touch with what people want, and it reminds them that we are here. Plus, it’s just nice to give back.”

A good example of that “giving back” is the annual street fair, which not only showcases businesses along the curve but also celebrates community partners such as neighborhood associations, nonprofits, and the city of Phoenix, which has invested hundreds of thousands of dollars to help improve the area.

For the street fair on March 5, 7th Avenue from Indian School Road to Campbell Avenue will be closed to all automobile traffic beginning around 8 a.m. The fair takes places from 11 a.m.-5 p.m. and includes a classic car show, artisan marketplace with over 175 local and independent crafters, food from local food trucks, and live music from great local bands including Tempe’s own Pistoleros. Visitors also can partake of the craft beer and margarita garden, a Kid Zone, and a fishing tank from Sportsman’s Warehouse.

“Our street fair has grown immensely and is very exciting,” Stickler says.

“I am very proud of what it has become. What has stayed the same is that all the business owners really help each other out and look out for each other, and they really care about the area.”

Douglas advises any business owners thinking of opening in the Melrose District to act now, as the area is only going to become more popular, especially with continued improvements like the Arizona Canal upgrades, and continued real estate investments like new condos and luxury homes amidst the historic homes and gentrified neighborhoods.

“The Melrose District has really become recognized as a hub of vintage and retro shopping,” says Sandweg, whose coffee shop is inside a converted vintage gas station. “That attracts new customers and new residents. As people continue to move into the historic neighborhoods surrounding us, that density becomes attractive to other people who enjoy a more urban, cosmopolitan lifestyle.”