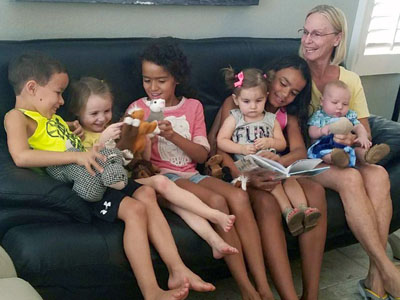 Life is good when you have a houseful of grandchildren like these to play with, says Susan Lynch, who survived major surgery at HonorHealth John C. Lincoln Medical Center in Phoenix, in order to retain the blessing. From left are Dre McBeth, Kinsley Geib, Jayda McBeth, Addison Anderson on Mishayla McBeth’s lap and Cannon Lynch on Susan Lynch’s lap (photo courtesy of Kyle Anderson).

September is Healthy Aging Month, yet the most effective medical test to ensure health for those 50-plus—the only one that can actually prevent cancer—is the colonoscopy, the one so many folks dodge and delay.

Like many of us, Valley watercolor artist Susan Lynch put off her regular screening colonoscopy far longer than she should have. “I didn’t want to do it,” she admitted.

Early in 2016, her new family medicine physician told 65-year-old Lynch she really must get a very overdue colonoscopy, a screening recommended for age 50. The test revealed growth of a number of pre-cancerous polyps, including a massive two-inch polyp deeply embedded in her intestinal wall.

Gastrointestinal specialists can usually clip suspicious polyps during a colonoscopy, stopping them from becoming problematic or cancerous. But these were too big and too embedded in Lynch’s colon to be removed this way. A surgeon needed to remove them.

“My daughter’s coworker recommended Dr. Low,” Lynch recalled. “He was so upbeat—the first thing he said was, ‘You’re not going to die,’ and I really appreciated that.”

She also appreciated the fact that he was clear about the surgery’s risks and benefits. “He told me everything that could go wrong and mentioned that in 2018 a new medical laser device will be available that will make the procedure even safer. I wanted to wait, but he told me that would be a bad idea.”

Lynch finally decided to have her surgery and now says she’s glad she did. “It really was the best experience, medically, I’ve ever had,” she said. When she arrived, “the check-in process was smooth, the nurses were ideal, and they had relaxing Zen music playing,” she said. “Dr. Low and his assistant met me and explained what would happen next, and then I got the IV, and I don’t remember anything else.”

Low used the medical center’s da Vinci surgical robot through a single incision in Lynch’s belly button. The surgery went smoothly and she doesn’t have the tiniest visible scar.

“It was tricky because she had severe pre-cancerous polyps, and I had to remove almost a foot of her colon, but she did remarkably well,” Low said.

The fact that Lynch was healthy and physically fit prior to surgery helped ensure her optimal recovery, Low noted.

Lynch went home on Mother’s Day, in time to celebrate with her husband, Stewart, and some of her five daughters, two sons and 18 grandchildren.

“When the hospital released me, they told me I could start doing anything I wanted, and I haven’t had any problems,” said the retired Valley Christian High School art and photography teacher. She’s gone back to golfing, yoga and babysitting for grandchildren.

However, she notes, it would have been a lot easier to get her colonoscopy on time and avoid all the surgery. That’s why she’s planning to make sure everyone in the family gets all their recommended medical screenings on time.