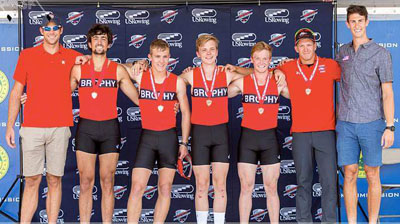 Brophy Crew’s heavyweight quad recently was named the third-fastest in the nation after competing in the U.S. Rowing Youth National Championships in Princeton, N.J., in June (submitted photo).

Brophy and Xavier College Preparatory’s crew teams have never let the challenges of living in a hot desert climate with limited access to large bodies of water deter them from training, competing, and—most recently—excelling at rowing competitions.

Brophy’s young crew program almost didn’t get off the ground this season, or in this case, into the water. Early in the season Tempe Town Lake, where the teams train, was drained, leaving them with no place to go—or row.

Even so, the athletic students maintained their focus, working on stationery rowers and strengthening equipment. They were able to get back into the water in May, just in time for the Scholastic Rowing Association of America Regatta in Ohio. Despite limited practice time on water, the team excelled with the heavyweight quad of seniors Costa Theodore and Michael Darby, and juniors Jon Carr and Kade Hawkins, taking first place. The lightweight quad of Nick Gross, Ryan Teetsel, Jett Curley and John Kelley took third.

With renewed confidence from these wins, as well as additional practice time on water, in June the Brophy crew entered the U.S. Rowing Youth National Championships in Princeton, N.J.—the pinnacle of youth crew competition. The quad of Theodore, Darby, Carr and Hawkins was in fourth place until they approached the finish, when they sprinted ahead and took third place by .2 seconds. 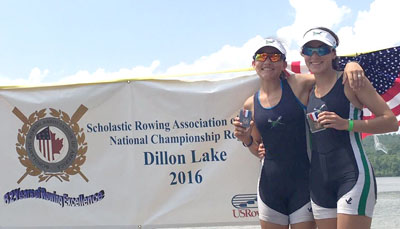 For this year’s Brophy crew team, adversity encouraged discipline and created determination, resulting in their most successful season thus far. Theodore and Darby will row for Cornell and the University of San Diego, respectively, next year, while Carr and Hawkins will return to lead Brophy Crew in 2016-2017.