By Teri Carnicelli
After nearly 13 months of construction, Madison Simis’ new campus was finished just in time to greet the 1,000-plus students for the new school year. Parents and students alike were delighted with the new state-of-the-art buildings, plentiful open spaces and play areas, and expansive new garden beds for the DIGGS program. 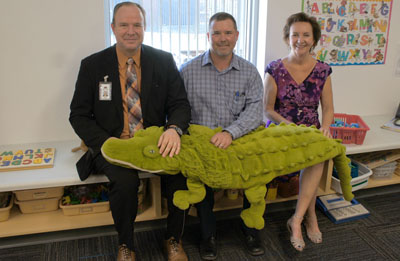 Families who didn’t get a chance to see everything, as well as interested members of the surrounding neighborhood, are invited to check out this $15 million K-4th grade campus during a special dedication ceremony set to begin at 5 p.m. on Monday, Oct. 17 at the school, 7302 N. 10th St. There will be hot dogs, drinks and entertainment by the school’s drumming corps.

The campus, originally constructed in the late 1950s, was experiencing a lot of issues with aging buildings that were no longer up to code, sewer backups flooding floor areas, and more. The Madison District asked voters to approve a $15 million bond to construct a new school from the ground up (except the cafeteria, which was replaced four years ago), and voters in November 2014 overwhelmingly said “yes.”

Phase I included a new two-story classroom where the old basketball courts were, so that no actual class time was disrupted. Once that building was complete, 30 classrooms for grades 2-4 were moved in—and those older buildings torn down to make way for the next, and so on. The project was done while kids were in attendance and completed over the summer.

The campus sports a variety of new technologies and energy efficiencies, such as LED lighting, Dyson hand driers, roll-up garage style doors on the cafeteria and music room to let in fresh air and natural light, and chilled and filtered drinking fountains that have a space where you can refill your own water bottle—and it tracks how many bottles are saved from landfills each time one is refilled. In the library, more e-books are being offered, and throughout the school there is a 3-1 ratio for students-to-computers. Most teachers support a BYOD policy, aka “bring your own device.”

All rooms are now accessed from interior hallways, which reduces the temperature and noise and prevents a lot of dirt and debris from being tracked in from the outside. It’s also better for security.

Quinn Kellis, superintendent of the Madison School District, said he is concerned about discussions taking place at the state level about doing away with school bonds and initiatives, to “make the playing field more even” for all school districts.

“Our Madison district really embodies the essence of local control. They wanted a new school, they voted for it, and they paid for it. For the state to say ‘you can’t do it’ is disrespectful to these neighbors.”

A good school district makes for a good community, he points out. “This school just enhanced this community ten-fold,” he says. “It is no longer a crumbling, dilapidated school, but something both parents and surrounding community members can be proud of.”

Madison Simis has been, and will continue to be a partner with The Recreation Association of Madison Meadows-Simis (RAMMS), with two ball fields on the revamped campus available for use to the parent-run, volunteer organization that provides competitive league and instructional play opportunities for children in grades K-8.

The project was completed by McCarthy Building Companies, which worked with a committee of teachers, parents, administrators and community members to focus on their suggestions for “building a better school.”