The Sunnyslope community was rocked to the core by the sudden death on April 22 of Julie Goehring-Stephenson, a retired educator who spent her entire 34-year career teaching drama at Sunnyslope High School. “Miss G,” as she was known, was held in great affection by her thousands of students, by her faculty colleagues, by parents and administrators. 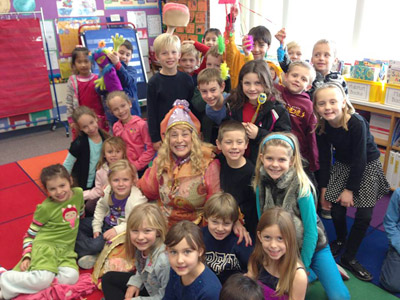 Former Sunnyslope High School Theater Teacher Julie Goehring-Stephenson didn’t slow down one bit after her retirement nine years ago. Through a series of serendipitous conversations, she developed the character of Sarabelle Toothington, the Tooth Fairy. She entertained and educated children about dental health in regular appearances at the Children’s Museum of Phoenix and at schools valleywide (submitted photo).

Many of those former students and friends will gather in celebration at 2:30 p.m. Sunday, June 5 in the Sunnyslope High School auditorium. “We’re going to laugh and cry and sing and reminisce and re-create scenes from her shows,” said Shara-Dawn Chambers, who has been actively involved with the music and theater programs at Sunnyslope High School for the last 21 years and was a close friend of Goehring-Stephenson. “We’re going to share photos and videos and memories. We’re going to celebrate Sunnyslope theater traditions that continue to this very day, nine years after Julie retired from teaching.”

When Goehring-Stephenson started teaching at Sunnyslope in 1973, she was fresh out of college and overflowing with enthusiasm. She staged her first seven musicals in the school “cafetorium,” with the most minimal resources imaginable, but in 1981 she moved her productions and her classroom into the newly constructed Kenneth E. Coffin Auditorium. She was an integral part of the auditorium’s design and construction, and it soon became home to her huge family of students.

During her years at Sunnyslope, Goehring-Stephenson taught theater skills and more. “She guided her students in ways that profoundly shaped their lives and those lessons they carry with them even today,” Chambers says.

Since her passing, Goehring-Stephenson’s Facebook page has been flooded with stories from student after student, telling how “Miss G” not only changed lives, but in some cases even saved lives.

“It’s a bit daunting to consider how to adequately honor a person whose impact has been so broad and deep, but we’re sure going to try,” Chambers said. The celebration on June 5 is free and open to the public.

In addition, to honor her life and work, the Julie Goehring-Stephenson Scholarship Fund has been established at Sunnyslope High School. Details about the fund are available through the school office or bookstore.