City council members, community members and city staff celebrated the completion of a pedestrian and bicycling bridge crossing the Arizona Canal at 15th Avenue north of Dunlap Avenue on Sept. 14. 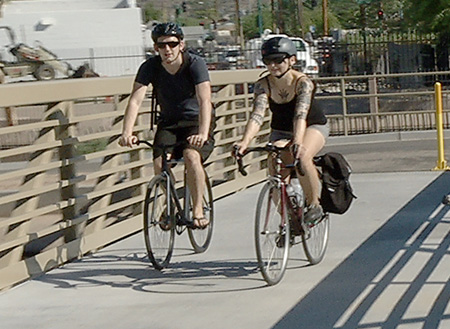 The timing could hardly have been better as the city of Phoenix officially opened a new pedestrian and bicycling bridge crossing the Arizona Canal at 15th Avenue north of Dunlap Avenue, just in time for bike riders and walkers to enjoy the cooler mornings and evenings (photo courtesy of Skyline Productions).

The event, which drew more than 40 attendees including entire families riding their bicycles, included a ribbon cutting and remarks by city officials, followed by a bicycle ride from the location along the Arizona Canal to 23rd Avenue, and returning along the canal to Central Avenue. The ride was approximately 5 miles.

The new bridge, which cost approximately $797,000 to build, connects the Arizona Canal Diversion Channel multi-use trail, to the nearby 15th Avenue Bikeway providing a direct bike route to downtown Phoenix.

“During the public comment portion of our budget process, thousands of cyclists came out and asked for more bridges over the canal areas to connect them to more bike paths,” said Councilman Daniel Valenzuela, who represents Phoenix District 8. “They were looking for connections south and north of the Arizona Canal,” which help keep cyclists out of the roads and away from potential traffic dangers, he explained.

Phoenix promotes a variety of activities for residents, including cycling, via FitPHX, a citywide wellness program. More information is available at www.phoenix.gov/fitphx.