By Patty Talahongva
A classroom assignment turned into a $300 award-winning essay for 15-year-old Bailey Lockwood, a freshman at Sunnyslope High School. Her essay, “A Road Less Traveled,” won the 2013 Moral Courage Essay Contest in the 9th/10th grade category, sponsored by the Anti-Defamation League, Arizona Regional Office.

Lockwood wrote about the courage John Fife showed as pastor at Southside Presbyterian Church in Tucson when he helped organize the Sanctuary Movement in the early 1980s. The group helped save thousands of refugees from Central America.

“With this essay, I was incredibly challenged,” she recalls. “I wanted it to be so good. I wanted to convey my ideas perfectly. There were a lot of late nights and lot of panic over deadlines,” she adds. She had less than two weeks to research and write her paper and she wished she had more time but, “… it ended up being the best thing that could have happened.” 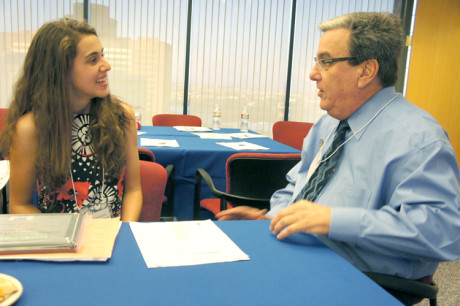 North Central youth Bailey Lockwood is congratulated on her winning essay by Bill Straus, Anti-Defamation League regional director. Straus complimented her use of compelling language and chatted about the fact that they are both “graduates” from Madison Meadows (photo by Teri Carnicell).

“I came in the night it was due,” says her mother Karen, who read the essay and helped count the words to make sure it was the right length. Karen says she couldn’t believe her daughter wrote the essay and adds, “She writes from the heart. We’re extremely proud of her.”

Bailey started her essay by quoting from the bible, “Thou shalt love thy neighbor as thy self,” and questioned the meaning of “neighbor,” reasoning that it applied in a humanitarian way and not defined by invisible borders between countries.

She wrote, “I was thoroughly impressed by his hands-on approach, and his unhesitating willingness to risk his own life on the front lines reveals his astounding sense of dedication.” Eventually the pastor’s efforts included 500 churches and synagogues nationwide that joined the movement.

Bailey compared their help to what occurred during the Holocaust when people ignored the law and helped protect Jews from being rounded up and imprisoned. “Essentially, Fife is an inspiration to me because of the dauntless courage he displayed when he sheltered Central American refugees during the Sanctuary Movement,” she went on to write.

That inspirational person still lives in southern Arizona. Today Fife is retired and he was thrilled to hear his story was still being told. “I’m delighted,” he said in a recent interview with North Central News. “Usually when I speak to college or high school students now, they don’t have any relationship to what happened in the 1980s so it’s nice that some young folks remember.”

Bailey first heard about the Sanctuary Movement when she read “The Bean Trees,” by Barbara Kingsolver. It was fiction based on facts. Fife confirmed the book was based on the movement.

“I hope people will read (my essay) and just take from it a sense of compassion, and I hope it will open people’s eyes up to the fact that we are all human beings,” Bailey says. “And when it comes down to it, saving lives takes precedence over politics. They saw the genocide for what it was and they weren’t afraid to step out and say it’s wrong.”

Her inspiration, though retired, is still involved in humanitarian efforts. Fife volunteers with the group No More Deaths. The organization puts food, water and medical supplies on the migrant trails. “Unfortunately not enough people stood up and helped the Jews. That’s one of the examples in history we looked at and said we can’t allow that to happen on our border, in our land,” Fife says.

He adds, “I’m delighted that Bailey is studying some historic times and learning from it.”

The freshman found out she won in mid-April. A representative of the Anti-Defamation League gave her the good news. “I was quite shocked,” she recalls. As for the prize money, Bailey plans on saving, not spending. “I’m pretty content. I just think it would be good to invest it in case I do have an interest in anything in the future.”

To read all of Bailey’s winning essay, visit www.mie.azcentral.com.