EDITOR’S NOTE: The Phoenix City Council at its Sept. 7 meeting postponed voting on this issue until its Sept. 21 meeting. Then just prior to the start of the Sept. 21 City Council meeting, the item was pulled from the agenda at the applicants’ request. Check back here for updates.

Also, this story has been modified from its original content. Carol Longstaff, who was listed as one of the owners of the property at 1348 E. Missouri Ave., along with DEL CES Living Trust, passed away in December 2014. We apologize for the confusion.

The owners of two homes next door to each other and built in the mid-1950s on east Missouri Avenue are asking to have them rezoned to residential office (R-O), which has some neighbors up in arms.

The homes are located at 1340 and 1348 E. Missouri Ave., on the north side just west of 14th Street. They are both single-story ranch style homes on large lots in the Robbins Estates. The current underlying zoning is R1-6, which allows for up to five homes in a conventional build, or 5.5 to 6.5 homes for a planned residential development (PRD). Unless the property was previously subdivided prior to May 1, 1998, only single-family attached homes are permitted. The maximum height in either case is 30 feet; generally that means two stories. 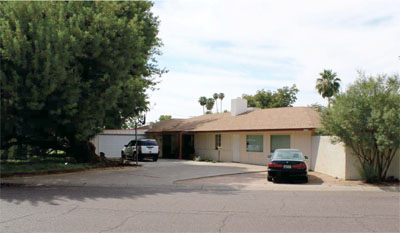 This home at 1348 E. Missouri Ave. is one of two under consideration for rezoning from residential to residential office, which has some neighbors protesting (submitted photo).

The R-O district permits conversion of residential structures for use as professional offices or other limited service uses. It also permits continuation of residential uses or reconversion to residential uses. Permitted uses in the R-O district include professional, medical, dental and administrative offices including clerical or sales representative offices. Other permitted uses include churches and small schools, such as a preschool.

Winton Architects Inc., at 1110 E. Missouri Ave., Ste. 800, sent a letter to some neighbors who were on the list of those who opposed the previous attempt at zoning change in 2005. The letter, mailed in May of last year, stated that the owners, who originally attempted to change the two properties plus an additional one adjacent to them from R1-6 to C-O, are now looking at R-O for only two of the properties.

During the Planning Commission hearing in 2005, the concept of R-O was raised by the commissioners because it is a lesser zoning category that is more compatible with adjacent residential. The owners weren’t as familiar with the zoning categories and had no legal representation at that time.

Then, as now, the owners of each property intended to use the homes for their own small businesses. Becker will use the property at 1340 E. Missouri Ave. for her small CPA practice and property management.

Derek Longstaff will use 1348 E. Missouri Ave. for his small environmental consulting business. Much of the firm’s work is done out in the field. Since the office component will only be in one small section of the house, the remainder of the house will be occupied by one of Longstaff’s employees and his family.

“The R-O district was designed to allow small office uses at the residential scale for homes along busy collectors and arterials,” says Taylor Earl, an associate with Earl, Curley & Lagarde, P.C., who represents the owners this time around. “That is the situation here, which is why we think this is an appropriate request. We respect the neighbors’ position but this is what R-O was designed for.”

In fact, a subcommittee of the Camelback East VPC completed a Missouri Avenue Land Use Study in 2003. The study evaluated the uses and conditions of the Missouri Avenue corridor between 7th and 24th streets. While recognizing the viability of residential uses in the corridor, the study notes that along the north side of Missouri Avenue, specifically between 10th and 16th streets, smaller office structures exist that are sensitive to their residential neighbors. The site design submitted for the R-O rezoning proposal is consistent with the recommendations of that study, according to city planning staff.

But many neighbors think the properties should be left as-is and say the Missouri Avenue corridor is a desirable place to live and the owners should have no trouble selling or renting the properties as residential homes.

“These homes should stay residential,” said Eric Bassingthwaighte, who bought his home directly behind one of the subject properties in April of last year. “They are viable and desirable homes; it’s a great area to live in. We are not against rezoning when it makes sense. But this is a great community and people want to live here. So what’s the win for the neighborhood?”

The owners have pledges that no changes will be made to either home’s exterior, and city staff stipulated that a review be required of any future exterior building modifications to ensure that the residential character of the buildings is maintained.

The Camelback East VPC ultimately voted to recommend the rezoning and forwarded the recommendation on to the Phoenix Planning Commission, which also gave its stamp of approval on Aug. 4, with a stipulation that the R-O zoning contain a height restriction limiting both buildings to one story plus 20 feet, which is still well under the two stories plus 30 feet that would be allowable under the R-O zoning.

Bassingthwaighte is not deterred by two rounds of approval. “We are unified and have a strong, clear message. I have seen items approved at the lower level that were denied by the Phoenix City Council. We are not giving up.”

The Phoenix City Council will decide on the rezoning request at its regular meeting set for 2:30 p.m. Wednesday, Sept. 7, at the City Council Chambers, 200 W. Jefferson St. The case number is Z-83-15-6.