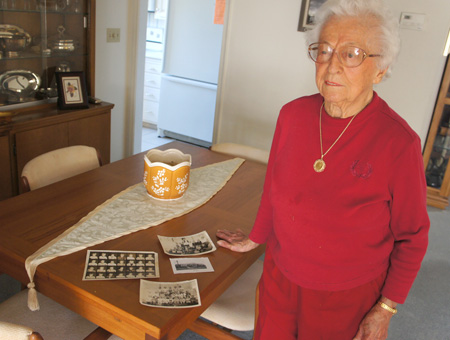 Once upon a time, there was only one Madison School, and Berta (Brodersen) Antrim can tell you all about it because she attended school there. The year was 1924 and she was 8 years old.

This month, the first-ever Madison Schools Alumni Mixer will be held and Antrim, now 97, is planning to attend.

She still doesn’t live far from her former grade school, and is just a couple of short blocks from the district’s newest school, Madison Traditional Academy (MTA).

As she passes by what is now the campus of Madison No. 1, she looks at the playground. “It’s such a nice playground area,” she comments. “It was much, much smaller,” she recalls, when she went to school there. At that time, the school was surrounded by pastures, citrus groves and farm areas.

Born in Canada, Antrim and her two brothers did not attend school because they were in a remote area of Alberta. Her first language was German. When her family moved to Arizona, she and her brothers, ages 7 and 9, all started first grade together. Later her older brother skipped two grades and continued his schooling.

Her parents had two more boys, making Berta the only daughter. “I was in command,” she laughs.

Her father inherited his brothers’ citrus business. The family had 1 acre of land at Glendale Avenue and 12th Street. Her family home still stands in the area today but the rest of the land is now subdivided. “Well, that’s progress,” she says matter-of-factly.

Madison School wasn’t a one-room schoolhouse, but each grade was in one classroom. Lessons started at 9 a.m. and ended at 4 p.m. “Most everybody walked to school,” she says, recalling her own trek of a few miles. And a daily adventure was the ringing of the school bell. “The janitor would ring the bell at 9 in the morning. We would all run up there and beg him to ring the bell.”

By her third year when the school purchased a bus, it was left to a teacher to drive it.

While she studied penmanship, Antrim laments that it’s not taught in schools today. Geography lessons were part of the course work but music wasn’t. She enjoyed playing sports and recalls softball games against Creighton and Washington in her higher grades.

After high school, she attended college for a few years and then married Hugh Antrim III. When World War II started, two of her brothers joined the Army. “They weren’t even American citizens but they took them anyway,” she says. She herself became a U.S. citizen when she was 27 years old.

True to the North Central neighborhood where she grew up, she and her husband lived in Phoenix, and their two daughters attended West High School.

She’s looking forward to the reunion and says she hopes to see former students now in their seventies and eighties. She will have plenty to share with other alumni from the Madison School District because she’s traveled throughout the United States, Europe, China, Japan, Mexico and Canada.

“Just so many tidbits and interesting stories of life back then,” says Rhonda Olson, director of the Madison Education Foundation, and organizer of the reunion. “Berta is a living history book of life in Phoenix for the last 90 years. She is truly an incredible resource.”

Madison Schools Alumni Mixer will be held 6-8 p.m. Tuesday, Nov. 12 at Culinary Dropout /The Yard, 5632 N. 7th St. Admission is $20 per person and includes one beer or wine ticket and light appetizers. There will also be a live auction. You can register on line at: www.razoo.com/story/MadisonAlumniMixer2013, or call 602-664-7903.

“I think the Madison Elementary School District is a unique district in Phoenix because so many families have lived in this same area for generations,” Olson says. “We hope to get a good cross-section of all of these generations at the mixer and invite everyone who’s ever been associated with the Madison schools to join us for some fun reminiscing.”