Chompie’s, Arizona’s New York Deli, is doing its part to help keep recess yards at Phoenix area schools safe. It presented a check for $11,282 to Playworks Arizona at Loma Linda Elementary on Oct. 24.

Playworks is a nonprofit organization that transforms recess by placing full-time coaches at schools to teach the kids how to play together, resolve conflicts through rock-paper-scissors, and how to be inclusive.

A survey of teachers and administrators from the seven Phoenix area schools, including Loma Linda, that participated in the program during the 2012-2013 academic school year credit Playworks Arizona for a 90-percent reduction in disciplinary incidents; a 68-percent increase in academic success; a 95-percent improvement in overall school climate; and 16 hours of recovered teaching time.

Exchange program gets visitors from Mexico
Biltmore Preparatory Academy kicked off its exchange program on Nov. 14 with students and chaperones visiting from Hermosillo, Sonora, Mexico.

Renewing the program with Mexico makes sense because many of the participating fourth-grade students at Biltmore Prep have been part of the innovative Spanish Immersion program for the past three years.

Students in the program from both sides of the border travelled to the Grand Canyon. For most of the students, regardless of where they were from, this was their first visit to the Grand Canyon. Many other weekend activities were planned to integrate the students and families. The students from Mexico also spent a day at Biltmore Prep with their partners in the classroom before they travelled back home to Hermosillo.

The exchange program was funded through donations and fundraising efforts. For more information, contact, Dunora Alba at 602-381-6160. 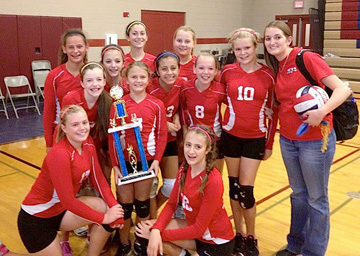 After a bye in the first round, MTA defeated Udall for a 2 set to 0 victory in the semifinals. In the other semifinal game, Madison Park, the 3 seed and defending 4A champion, upset the previously unbeaten No. 2 seed, Sevilla West.

Eighth graders Zoe Traynor, Sloane Wheeler and Jessica Schneider came off the bench and provided the team with front- and back-row help. MTA won a back-and-forth first set and overcame an early deficit in the second set to win 2 sets to 0.

Gamboa’s leadership and all round dominant play earned her the Tournament MVP.

Huyck named a Teacher of the Week
The connections Jessica Huyck creates with her parents and students at Madison Rose Elementary on a daily basis are remarkable. She takes the time to really get to know all of the kids in her class, as well as their families. She helps them through hardships with words of encouragement and an understanding smile.

Fulton Homes is honoring Huyck as its “Teacher of the Week” for the week of Dec. 6. This is the 14th consecutive year Fulton Homes has sponsored the educational program that honors Valley schoolteachers for their excellence.

Huyck was nominated for the award by a parent of one of her second-grade students who says, “She has been so great and understanding. She has gone above and beyond the call of duty for any teacher.”

Throughout the school year the program pays tribute to teachers who inspire their students. Both students and parents can nominate their favorite educator each week for that teacher’s chance to win $300 from Fulton Homes and other great prizes. The selected educator will be announced each Friday from 6:20 to 7:20 a.m. on KNIX’s Ben and Matt in the Morning Show, heard at 102.5 FM. Students and parents can nominate their preferred teacher each week by visiting www.knixcountry.com, entering the keyword “Teacher,” and submitting a brief form describing why their teacher deserves the distinct title.

Students in the National Junior Arts Society (NJAS) Club at Madison No. 1 school recently completed a mural at Duck and Decanter. 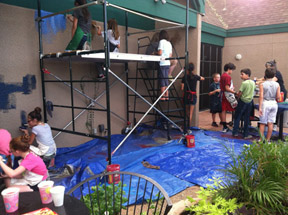 Students from Madison No. 1’s National Junior Arts Society paint a mural on a wall in the Tea Garden at Duck and Decanter (submitted photo).

Deborah Itule of Gardens From The Heart redesigned the Duck and Decanter’s Tea Garden, and thought a mural would be just the right finishing touch. “Part of my project from the beginning was to include the Art Club from Madison No. 1,” she explains. “Karen Mason with the Duck and Decanter was open to the idea and in turn, I brought in Michelle Lindsay, the Art Club director. Karen and Michelle thought this would be the perfect way to involve the students in a community event.”

The students completed the mural and also created art tiles that were sold on Nov. 30 at a fundraising event to benefit Beads of Courage (beadsofcourage.org), also held at the Duck.

“The Duck and Decanter has strong ties within the community and did not hesitate to be a part of this project,” Itule says.

Club director Lindsay also feels very strongly about involving the students in community events that focusing on giving back and donating their time through art. The students spent many hours working on this project and did a great job.

Camelback club performs at Disneyland
Camelback High Masque and Gavel club members became stars of their own Disney show on Oct. 5, when they entertained visitors at Disneyland Resort.

They traveled from Phoenix to the Disneyland Resort in California to take part in a Disney Performing Arts Program.

Dance groups, choirs, ensembles and marching bands from around the world apply to perform each year as part of Disney Performing Arts at both the Disneyland and the Walt Disney World Resorts. Once selected, they are given the opportunity to perform at the resort for an international audience of theme park guests. Millions of performers have graced the stages of the Disney Resorts in the more than 25-year history of the program.

Auto tech students get car to work on
The Auto Tech programs at Metro Tech just added another vehicle to its line-up, when Tom Richardson, a vice president of the National Institute for Automotive Service Excellence (ASE) and Mike McAfee of the Arizona Automobile Dealers Association dropped off a 2008 Buick Enclave.

McAfee also represents the Automotive Youth Educational Systems (AYES), and they were visiting the newest NATEF-certified (National Automotive Technicians Education Foundation) high school program. The connection has also garnered a Toyota Avalon and van, a GM Saturn, and a Chrysler Jeep for students to work on.

Last year in its first year of certification testing, 29 students earned 92 certificates. These certificates are recognized nationwide and are helpful for students when applying for scholarships and jobs.

Central students sign up for college
Central High participated in the College Application Campaign during November, with a goal of every senior applying to a college or university. College readiness activities took place on campus, and those who participated received a neon green bracelet band that reads, “I Applied!!”

The program is through a partnership with Degree Phoenix, and the Arizona Commission for Postsecondary Education. Degree Phoenix is a collaborative effort between the city of Phoenix, Phoenix College and Phoenix Union to strengthen educational attainment for students in the metro Phoenix area, funded by a grant from the Lumina Foundation.

Fifteen Arizona and New Mexico students were awarded educational grants in five different categories: Business, Education, Engineering & Math, Healthcare Science, Technology & Innovation, in each of 10 regions throughout the country. Davila was awarded a Silver award in the Education division.

More than 10,000 high school students apply for the Hispanic Heritage Youth Awards. All recipients are eligible to be selected as their category National recipient, receive a laptop computer, and a trip to be recognized at the National Youth Awards ceremony.

Davila has maintained a 4.0 or higher GPA and challenges herself in rigorous classes. She currently is involved and in many different leadership clubs and groups including MECHA, Ambassadors Club, and the French Club. She also participates in the ACE (Achieving a College Education) program, and Big Brothers/Big Sisters.

Lopez qualifies for weight-lifting finals
Martin Lopez, an 11th grader at Metro Tech, qualified for the USA Youth Nationals Weight Lifting Championships in the Performance One Regional Qualifier, held in Mesa on Nov.2.

Maryland honors vets at ceremony
Those who have served our country in the U.S. Armed Forces were honored Nov. 8 at a flag-raising ceremony held at Maryland School. Veterans, students, staff and family members gathered around the school’s flagpole in an inspirational tribute to all five branches of the military.

As part of the U.S. “island-hopping” strategy to push the Japanese back across the Pacific following the bombing at Pearl Harbor in World War II, the Marines trained troops of Navajo Indian descent to use their language as part of a code to communicate troop movements and other important battle information over telephones and radios.

The ceremony was organized by Maryland PE teacher Leon Shinsky, who acted as emcee for the event. The Washington High School Marching Band played the National Anthem as local Boy Scout Troop 747 members raised the flag.

Following the brief ceremony, junior high students were treated to presentations by former Army Sgt. Jeff Rattay from the Joe Foss Institute, which enlists veterans nationwide to teach young people about the value of their freedoms, and by Shinsky’s former student, Marine Cpl. Marcus Chischilly.

Vasey surprised as a Teacher of Week
Orangewood Elementary sixth-grade teacher John Vasey has been selected as a KNIX and Fulton Homes Teacher of the Week. Vasey received the news during a surprise visit from KNIX morning personality Carolyn Coffey on Nov. 6.

Vasey was nominated by one of his students, Jennifer B. In her nomination letter Jennifer wrote, “My sixth grade teacher, John Vasey, is an amazing educator that makes school fun and exciting. He is very patient and kind. He has a way of making everybody understand the subjects and my classmates and I like to learn when we are with him.”

Vasey received $300 from Fulton Homes, a clock and goody bag from the Dairy Council of Arizona. He was spotlighted during the Ben and Matt morning show on KNIX on Nov. 29. 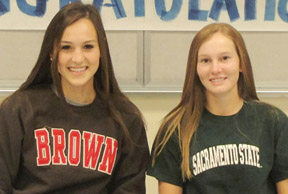 Megan Hauptman will study and play golf at Brown University, while Katie Dunaway will buckle down and tee off at California State University, Sacramento.

In 2009 and 2012, the Xavier golf teams were ranked No. 1 in the National Federation Record Book. The Xavier golf program, led by Winsor, has produced a total of 30 5A State Championship teams.

the AP exams. The AP Program recognizes high school students who have demonstrated college-level achievement through AP courses and exams. This achievement is acknowledged on any score report that is sent to colleges the

following fall. The AP Scholar Award is granted to students who receive scores of 3 or higher on three or more AP exams.

Laguna also was recognized with a National Hispanic Recognition Program (NHRP) Scholar Award. The NHRP was initiated in 1983 by the College Board to identify outstanding Hispanic high school students.

Laguna has not yet decided on a college major or which college he will attend in the fall.

The approximately 34,000 Commended Students placed among the top 5 percent of more than 1.5 million students nationwide who entered the 2014 competition by taking the 2012 Preliminary SAT / National Merit Scholarship Qualifying Test.

Octavia White also has been named a semifinalist in the 2014 National Achievement Scholarship Program. She scored in the top 3 percent of more than 160,000 Black American high school students who took the 2012 PSAT/NMSQT.
Brophy’s newspaper
receives honors

The Arizona Newspapers Association and the Arizona Associated Press Managing Editors named The Roundup the 2013 “Best High School Newspaper” in its annual Better Newspapers Contest. The Roundup won the same award in 2012 and 2011.

The National Scholastic Press Association named The Roundup a 2013 “Pacemaker” winner in the category of Broadsheet 9-16 Pages. The Pacemaker is the top honor the NSPA gives. Finalists were named at the NSPA national conference in Boston on Nov. 16. The Roundup last earned this honor in 2009.