Madison Meadows, a Holiday Retirement community located at 7211 N. 7th St., hosted a surprise anniversary dinner for two of its residents on June 11. 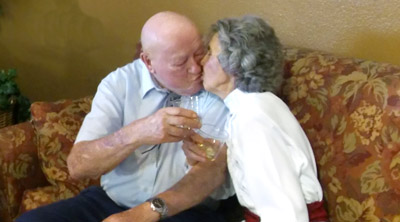 The flame is still burning for Dean and Mary Jones, who celebrate their 70th wedding anniversary with a toast and a kiss (submitted photo).

Mary and Dean Jones’ love story is one for the ages. Unbeknownst to one another, they grew up less than 25 miles apart in Montana and shared many mutual friends. It was not until they both attended Montana State College—now Montana State University—that destiny stepped in to the situation.

All students chipped in on daily chores in the spirit of co-op life at the college, and it was then that Mary and Dean were both assigned to scrub the dining room floor and serendipitously backed into one another. The two fell in love and were married June 9, 1946. Now, 70 years later, Mary and Dean are just as in love as they were in the 1940s.

Friends, family, and fellow residents at Madison Meadows, a local independent senior living community, helped the pair celebrate their platinum anniversary with a surprise dinner at the community. Following dinner, the couple’s favorite entertainer, the Rip James Show, serenaded residents as they danced the night away.