Home / Business / After fire, Babbo aims to reopen in November

After fire, Babbo aims to reopen in November

By Colleen Sparks
Babbo Italian Eatery in North Central Phoenix will likely be closed for a few more months after a fire caused extensive damage to the building.

The restaurant at 6855 N. 16th St. has been closed since a fire ravaged the structure in the shopping center slightly south of Glendale Avenue on April 28. The blaze ignited outside the building in the utility area, said Ken Pollack, owner of the 16th Street restaurant, as well as the seven other Babbo Italian Eatery eateries in the Valley. 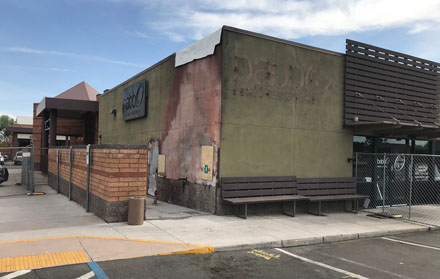 A fire in April caused extensive damage to Babbo Italian Eatery at 6855 N. 16th St., and the restaurant is expected to remain closed until November (photo by Teri Carnicelli).

Pollack was on vacation for his anniversary with his wife when he got a call from the restaurant’s general manager telling him about the fire. The fire began at 1:30 a.m. and it is believed a homeless person might have started the blaze, but police and the fire department are investigating, Pollack said. A video camera at another restaurant in the shopping center captured the fire.

Babbo’s catering services are still available for North Central Phoenix customers, as food is prepped and delivered from another location.

Employees at the North Central Babbo have been working at the other restaurants in the Valley, all owned by Pollack and his family.

Pollack expects the Babbo on 16th Street will reopen in November. Many customers have e-mailed him and his family expressing their support. Babbo offers classic Italian meals and modern Italian-American cuisine and opened the 16th Street spot about 10 years ago.

“It’s a very good area,” Pollack said. “It’s a popular corner, a very good store for us. We have regular clientele that eat there all the time so we’re excited about getting reopened. We just really appreciate the community support.”