As a recipient of the Arizona Diamondbacks Grand Slam Award, ALP is taking the 27-year-old Operation School Bell program mobile. Thanks to the $100,000 grant from the Arizona Diamondbacks Foundation, a 40-foot city bus has been retrofitted into a mobile dressing center, complete with a waiting area, dressing rooms, racks for clothing and shoes, shoe fitting area and a sewing station. 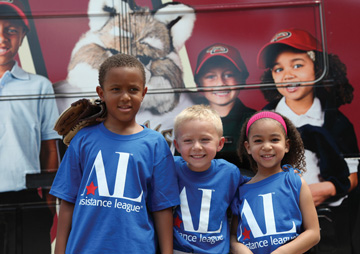 The grant award from the Arizona Diamondbacks and a matching grant from BHHS Legacy Foundation will enable the bus to bring new school clothing, shoes and hygiene kits to low-income children at Title 1 schools throughout the Greater Phoenix area. The bus began operating in July and is already booked for the first few months.

The idea to provide a mobile platform was sparked by the difficulty that many of the schools experience in bussing the children to the Assistant League’s Philanthropic Center in Sunnyslope. The Delivering Dreams Bus solves this by bringing much-needed clothing to the schools.

“We are proud to know that kids will now approach the D-backs Operation School Bell Bus to pick up these shoes, clothes and other necessities with feelings of excitement, rather than fear or embarrassment,” said D-backs president and CEO Derrick Hall. “We want them to feel like they are a part of the D-backs family.”

“The partnership with the Arizona Diamondbacks is perfect for this project, and will help more than 3,000 children in need to receive clothing assistance in its first year,” said Aimee Runyon, ALP executive director.

Last year, Assistance League of Phoenix members volunteered more than 25,000 hours and raised more than $500,000 that served nearly 43,000 children and families in the greater Phoenix community through four philanthropic programs. The organization recently celebrated 50 years of service to the Phoenix community. For more information, call 602-944-7376 or visit www.alphx.org.