Making the grade while playing golf

By Brooke Stobbe
After several neck injuries, he stepped off the court. However talented or passionate, the damage was not worth the game.

North Central teen Jeffrey Miller’s decision to quit basketball opened his schedule for less aggressive activities. At age 10, he was eating at a golf course with his family during a drive-chip-putt competition. Despite not pre-registering and lacking experience, he decided to join the game.

He walked onto the course with the other players and family members staring. Without practice or training, he convinced himself he would play well.

He got second place.

“From the moment I hit that first drive, I knew it was something I really loved,” he recalled. 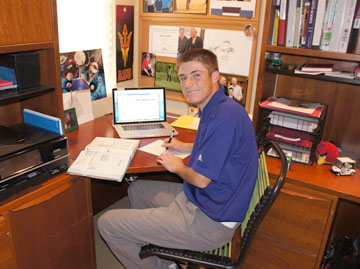 North Central youth Jeffrey Miller goes to an online high school in order to travel around the country to play competitive golf. His work station at home contains a laptop, books, and inspirational photos—and at least one familiar college logo
(photo by Teri Carnicelli).

Jeffrey, 15, moved to Phoenix four years ago and attends an online high school in order to pursue the game of golf. He plays in more than 18 tournaments across the country each year, and ranked second in 2012 in his age group by the Junior Golf Association of Arizona, according to the website.

“Golf is a really challenging sport and I love how you can never master it,” Jeffrey explained. “There’s always something you can learn about it each day. If you’re really good you can go all over the world and meet amazing people.”

“He gives me positive energy, and when I’m positive, I play better,” Jeffrey said.

Matt Trimble, instructor at the ASU/Karsten Golf Course, has worked with Jeffrey for several years and describes him as a hard worker who does not make many mistakes.

“To be good at anything you have to love it and right now, he loves [golf],” Trimble said. “He’s not just playing it, but thinking about it. He writes down statistics; he’s trying to understand other players. Combine a kid who loves what he’s doing along with working really hard at it and no matter what, you’re going to have success.”

In order for Jeffrey to spend six days per week on the golf course and travel throughout the year, he attends Arizona Connections Academy (ACA), an online K-12 school (www.connections academy.com). He is in ninth grade this year.

“We are a really great option for kids who are serious about school and athletics, but want to go to a recognized university to continue their sport,” said Kerri Wright, ACA principal. “Jeffrey has been with us for four years and is a great example of a student who used our school to his advantage. My student athletes are my very strong students.”

Although the teachers are required to phone their students at least twice every semester to discuss course material, the online school still requires the students to be highly self-motivated, Wright pointed out.

“For my student athletes, their grades are typically pretty amazing,” Wright said. “None of their coaches would want them to do poor and a lot of my students want to go to university to play their sport, so they know their grades go right along with it.”

Jeffrey said a good education is important for a back-up career; he loves learning and wants to begin taking Advanced Placement courses.

“He knows that if he’s worried about schooling, he can’t focus on his golf,” mom Julie explained. “The better he can do and excel in his education, the more freedom he has to do what he wants.”

Jeffrey said he always takes at least one day off of golf each week to keep from burning out.

“I like to ride my bike around the neighborhood, draw, do some reading or swimming, and I really like movies,” he said. “There’s a group of kids in Arizona that are homeschooled too, so we go to the movies sometimes or play on the golf course. Through them I can meet other friends, too.”

Jeffrey said he does not miss the team-aspect he had in basketball because he enjoys being in control of the game.
“Golf is a solo sport, golf is myself,” he said. “I feel like I’m in charge with whatever I do and I’m in charge of my own destiny.”