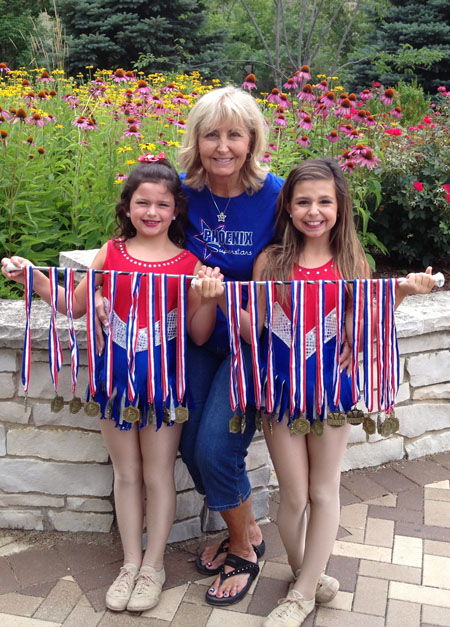 This was a new experience for three of the 13 members of the Phoenix Superstar Twirling Team, but not for their coach, North Central resident Becky Hewitt. She has been coaching and taking Arizona twirlers to compete for the past 38 years.

The girls trained once a week during the school year with the Arizona Twirling Athletes, a nonprofit youth organization, and then attended a four-day twirling camp in Prescott and commenced with daily practices in the gym for four hours during June and July.

The rigorous schedule paid off as the team came home with 42 medals for individual events, placing the girls in the top 10 in the country—which included a World National title in the Senior Small Twirling Team category.

In addition, 14 of Phoenix Superstar’s twirling and dance teams also placed in the top 10 in the United States.

Hewitt, who is now coaching her two granddaughters, will offer a program for interested beginning twirling students between the ages of 6 and 16 in September in five different local school districts. For registration information, call 602-997-0522.

Coached by Sereno Director of Coaching for Girls, Paul Taylor, the teams include the best 15- and 16-year-old players in the Phoenix Metro area and train year-round, competing in the Elite Clubs National League (ECNL). 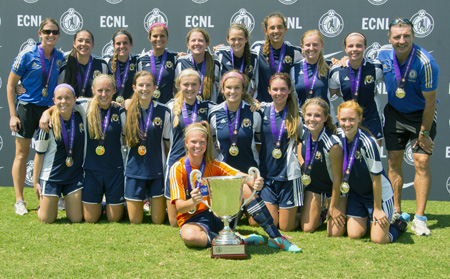 The ECNL is recognized as the top women’s youth league in the country and consists of 76 of the nation’s top soccer clubs. It was Sereno 97 ENCL that took first place.

The majority of the team has played together for the last seven to eight years. Among the team members are North Central residents and Xavier College Preparatory students Kelly Harris, Hannah Hudson, Amanda Lane, Bette Poblete and Shelby Roberts.

The girls train year round, three to four nights per week, at Phoenix’s Reach 11 Soccer Complex, Sweetwater Park and the Scottsdale Sports Complex. The girls also are trained in the gym by Athletic Performance Training Center in Phoenix.

Team members are committed to giving back to their communities. This past year, the players volunteered more than 750 hours of community service—even volunteering during their training time on the road to nationals. The team also spent a weekend together moving refugee families into their new housing though the Welcome to America organization.

Lacrosse club has high hopes for season
Face-offs, groundballs, riding, and attack. Those familiar with lacrosse understand these terms in describing the game’s fast-paced action.

Arizona’s original lacrosse league, the Arizona Youth Lacrosse League (www.azlax.org), dates back to 1996. This season there will be 14 middle school lacrosse teams participating in the sport that many liken to a hybrid of soccer, football, hockey, and basketball.

Phoenix Patriots Lacrosse Club, established in 2007, will enter the 2013-14 season in the boys middle school division in which sixth through eighth-grade student athletes participate. Under the leadership of Coach James Fishman, the Patriots are coming off a successful 2013 season but graduated 15 players.

Central Phoenix schools have provided many players, including Madison Meadows, All Saints, and St. Francis Xavier. Recruiting new players is always a priority and there are numerous opportunities to take up the sport.

Those interested in learning more about the “fastest game on two feet” are encouraged to visit the Patriot’s website www.PhxPatriotsLax.com or e-mail patriotlax08@yahoo.com.