Michelle Harrington is not your typical foster parent. Not because she is single, or because she stands over 6 feet tall. What sets her apart from other foster families is that she also works in the foster-care system as a licensing worker.

Harrington jokes that she came into it backwards. She started out looking to adopt, wound up getting licensed to foster children, and later became a volunteer trainer for Arizona’s Children Association, which eventually hired her. 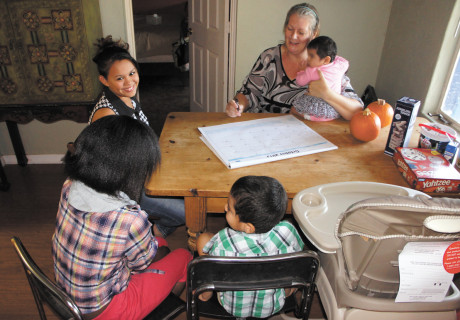 Adoptive and foster parent Michelle Harrington plans out the week’s activities with her adopted daughter, Luz (left), and her three foster children
(photo by Teri Carnicelli).

Her daughter, Luz, who is now 15, was a surprise in more ways than one. “Teens were not a part of the plan,” Harrington admits. She was thinking of children more in the age range of 3 to 7. Luz was 13 when she came into Harrington’s home.

Harrington decided to open her home again as a foster parent, taking in an 11-month-old toddler and her 4-year-old brother, as well as 17-year-old refugee from Burundi. “The kids are great, and the experience is very rewarding,” she says.

Further adoptions aren’t out of the question, Harrington adds. “I know I’m not done, but I don’t know what the makeup of this little family is going to look like.”

November is National Adoption Month, and local organizations like Arizona’s Children Association are using the heightened awareness to push the need for more foster and adoptive parents in the state.

According to the most recent numbers released by the Arizona Department of Economic Security (DES), there are just under 15,000 children who have been removed from their homes, 10 percent of whom are housed in shelters or group homes. There is a total of about 1,400 children in group homes in Phoenix and surrounding areas, of which 37 children are ages 6 and younger. Even more shocking, there are 15 children aged 3 and younger in what is referred to as “congregate” care.

And out of 400,000 children in foster care in the United States last year, only 52,000 were adopted, according to the Administration for Children and Families’ Children’s Bureau.

With such shocking numbers, the need for foster and adoptive families is more critical than ever before. And despite the well-publicized state budget cuts to the foster care system over the last few years, money is still available to assist foster families.

In addition, there is a stipend available for childcare, and many nonprofit agencies work directly with the foster care system to provide foster families with funds for things such as camps, dance classes, sports clubs and other recreational programs.

“You don’t have to be a superhero to be a foster parent,” Harrington emphasized. “You just have to care, to be patient and understanding. The children need structure and discipline, but they also need to know you’re going to be there, no matter what.”

You also have to undergo approximately 30 hours of training before being licensed. Arizona’s Children Association has orientation sessions, to answer questions and provide more information about the process to potential foster families, scheduled for 6 p.m. Monday, Nov. 4 and Dec. 2 at its offices, located at the southeast corner of 7th Street and Missouri Avenue, at 711 E. Missouri Ave., third floor. For more information or to RSVP (not required) for either orientation, call 602-253-1620.