By Teri Carnicelli
At first glance it looks like an adult education class, were it not for the various dogs lounging on the cool linoleum floor under the tables of where their attentive owners sit.

“It’s not just what you say to your dog, but how you say it,” explains instructor Jake Willison, adding that “no matter what you think, dogs don’t speak English, but the do react strongly to the tone of how you’re saying something. So if you’re trying to correct your dog, don’t speak sweetly or in a high voice like you do when you praise him.” 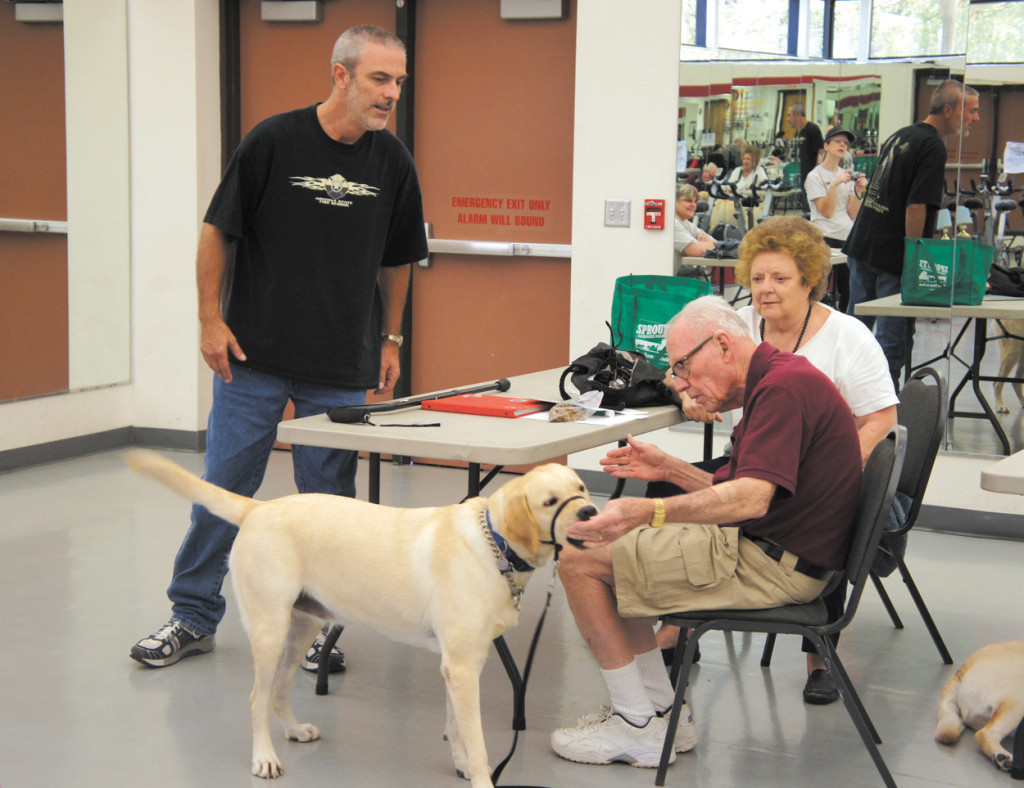 Jake Willison, left, an instructor with Happy Tails Service Dogs, watches as student Robert Westfall commands his 3-year-old yellow Labrador retriever, Molly, to “touch” his hand, while Robert’s wife, Dorothy, looks on. The “touch” command can be used to teach a dog to do everything from turning on a touch lamp to pushing open a door (photo by Teri Carnicelli).

The students, ranging in age from mid-20s to nearly 80 years old, listen attentively—because this isn’t just about training a well-behaved pet. It’s about turning their own dogs into certified assistance animals.

Willison is an instructor with Happy Tails Service Dogs, a nonprofit organization that teaches people with physical disabilities and those who are deaf or hard of hearing how to train their own dog to be a service dog as defined by the Americans with Disabilities Act. Willison has been with the organization since 2003; prior to that, he was a veterinary technician and also owned an animal hospital for a short time.

His fellow instructor on this particular day is Leigh Cain, a certified obedience instructor who has worked with Happy Tails for five years.

Students and their dogs come to class at the Legacy Foundation Chris-Town YMCA once a week for approximately 15 months. Besides the classroom, instruction is also provided to the students both during group outings in the community as well as one-on-one instruction in the student’s home.

One of the current students is North Central resident Robert Westfall, 79, who has Parkison’s Disease and is nearly deaf. He and his 3-year-old yellow Labrador retriever, Molly, attend class each week along with Robert’s wife, Dorothy. Molly is eager to learn and please her owner, who sometimes has trouble speaking loudly and enunciating clearly.

Willison explains that Westfall must say the command clearly and wait for the dog to respond, and then reward her when she does. But Molly knows there’s a cookie in that outstretched hand and is sometimes too eager to get her treat—without obeying the command first. It’s something that all the students run into, but Willison advises they be patient and consistent, and don’t give the treat until the task is complete.

If all goes well, when the 15 months are up the student’s dog will have learned necessary skills that provide increased opportunities for the person with the disability to function more independently in his or her own home as well as in the community.

Some of the dog owners have mobility issues, while others have vision or hearing loss. The dogs are training to do things like turn on touch lamps, open and close doors, carry objects, and brace all four legs so that the owner can use the dog’s back as leverage when standing up from a seated position.

Dogs who participate in the Hearing Dog classes, which are held at the Devonshire Senior Center, learn skills such as alerting their owner to the sound of a smoke alarm, a knock or doorbell, an alarm clock, and a phone ringing.

“Learned tasks are based on individual needs of the owner,” explains Joyce Weber, executive director of Happy Tails, which she helped to establish in 1993; the organization received its nonprofit status in 1996. Weber’s son, Willison, has been with the program for 15 years.

Weber was inspired to create Happy Tails when she learned that there was an average waiting list of 3 to 7 years for someone to receive a professionally trained service dog, and the cost could reach into the thousands of dollars for the disabled person to acquire the dog.

What makes Happy Tails so unique in the service dog arena is that all training services are provided free of charge to the students, Weber says. And they are training their own pets, many of whom have been adopted from local shelters.
The costs to raise and train a guide dog through a professional agency can exceed $40,000 and take up to two years.

The dogs themselves have to be no younger than 12 months and no older than 4 years old, must be spayed or neutered, licensed with the county, up to date on their immunizations, and must show no aggression since they will be in class with other dogs.

Their owners must be Arizona residents, have a physical disability as recognized by the Americans with Disabilities Act, be willing to commit to two hours a week of classroom training as well as home training for approximately 15 months, and be able to provide essential care of a dog.

Since its inception, the program has graduated nearly 50 service dog teams.

If you would like to learn more about Happy Tails Service Dogs, Inc. call Joyce Weber at 623-580-0946 or visit www.happytailsservicedogs.com.