By Patty Talahongva
Fans are whirring overhead and people are busy moving about the warehouse at the Desert Mission Food Bank, 9229 N. 4th St. Some people are patiently waiting to get a box of food. Toward the back sitting on the floor is a group of students from Mountain View School. They are busy checking canned food before placing them on a conveyor belt where more students will sort them. Other students are carefully putting the food into specific bins. 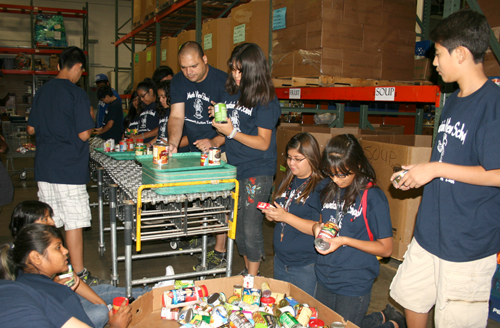 For nearly two hours, they sort food and prepare emergency food boxes. “I’m doing something good for the world,” explains Maria Lopez, who will be an eighth grader at Mountain View next month.

“We want this to be a positive, meaningful experience,” says Valenzuela.

The program started last summer with 22 students. The application required an essay on leadership. This year, nearly 50 kids applied but only 22 were accepted.

The field trips are sponsored by the Phoenix Suns Charities. The nonprofit group has a program called Angels on Patrol that works with school resource officers who identify needs in the community. Holloway saw the need and importance of the Community Action Team and he approached the Suns Charities for funding.

“Phoenix Suns Charities has funded more than $15,000 to Angels on Patrol since 2010, and we know it is money well spent,” says Robin Milne, executive director of the Suns Charities. “Our missions are perfectly aligned: to get help to children in the most need, as seen in real-time by city of Phoenix law enforcement officers.”

The summer portion of the CAT program runs throughout June, Monday through Thursday. The day starts at 7:45 a.m. with breakfast and the first example of leadership. After breakfast, each participant helps clean the tables and sweep the floor. Watching them closely are the younger kids in other summer programs on campus.

“They get to see them in action and the little kids look up to these guys,” Valenzuela points out.

From there it’s off to the classroom for lessons in how to make good choices and how to develop leadership skills. New this summer was the added bonus of learning Karate. Valenzuela also shows them motivational videos.

He and Holloway brought in detectives who talked about the negative affects of graffiti. Now the students understand damage to property values and how expensive it is to clean up marked property.

Valenzuela challenges them to think about their character. “Are you nice to people?” “How good is your word?” “Are you on time?” And finally, “Do you want to make it better or do you complain?”

He schedules community service work for them like sorting food at the food bank. One week he took them to the St. Vincent de Paul dining hall in Sunnyslope. The kids served 800 meals to mostly homeless people.

“You think about what you have, and how others don’t have those things,” recalled Carlos Daniel Iturriaga. He was surprised to see so many needy people. For Iturriaga the heart of the matter is, “We like to help people,” he says simply. “When we leave we know we did something good today.”

After they fed the homeless a meal of meat, salad, spinach and bread, the students pulled out their own peanut butter and jelly sandwiches and ate.

As a reward for their hard work and to also to expose them to fun adventures, Valenzuela takes the students bowling, roller-skating, to movies and even to baseball games.

Valenzuela adds, “We are always looking for an organization in the community that needs help. If they have a job a group of eighth graders can do, we would love to have the opportunity to talk to them.”

And the offer goes the other way, too—if you would like to donate to the program, Valenzuela says he’s happy to receive more funding. You can reach him at 602-347-4100.