By Patty Talahongva
In the span of two months, two local childcare and pre-kindergarten programs have closed in the North Central community, both citing a drop in enrollment as reason for their demise.

For Guiding Light Preschool at First Christian Church, 6750 N. 7th Ave., it means closing doors that had been open to area families for 47 years.

“Our license with the state was No. 15,” says Kenyon Ackeberg, the administrative pastor. Guiding Light was licensed to take up to 140 students but when it closed on May 24, the school only had 46 students enrolled. Guiding Light served children from age 2 to pre-kindergarten.

In the past, Guiding Light had a robust population. “At one time it even went up to fourth grade,” Ackeberg recalls . In the last seven years, however, the program eliminated the elementary school ages and two years ago kindergarten was removed. At that time Ackeberg estimates the enrollment was between 65 and 70 students.

“Really the sharpest decline came when Madison Traditional School opened and offered pre-kindergarten, and enrollment there would guarantee a spot for the child in the [elementary] school,” but Ackeberg emphasizes he isn’t blaming anyone and there are no “sour grapes,” as he put it. “If I were a parent I would do the same thing,” he said. “Things just change.”

He is happy Guiding Light gave ample notice to the staff of nine. “We really gave our people two-and-a-half months’ notice,” he says, so staff members had time to look for new jobs. “We felt really good about that. We’re happy they secured other employment.”

Ackeberg plans to use the space to house other programs that are currently located in modular buildings on the church campus that are in need of repair.

Not too far away at the Beatitudes Agelink Intergenerational Child Development Center, it’s lights out as well as of July 12. 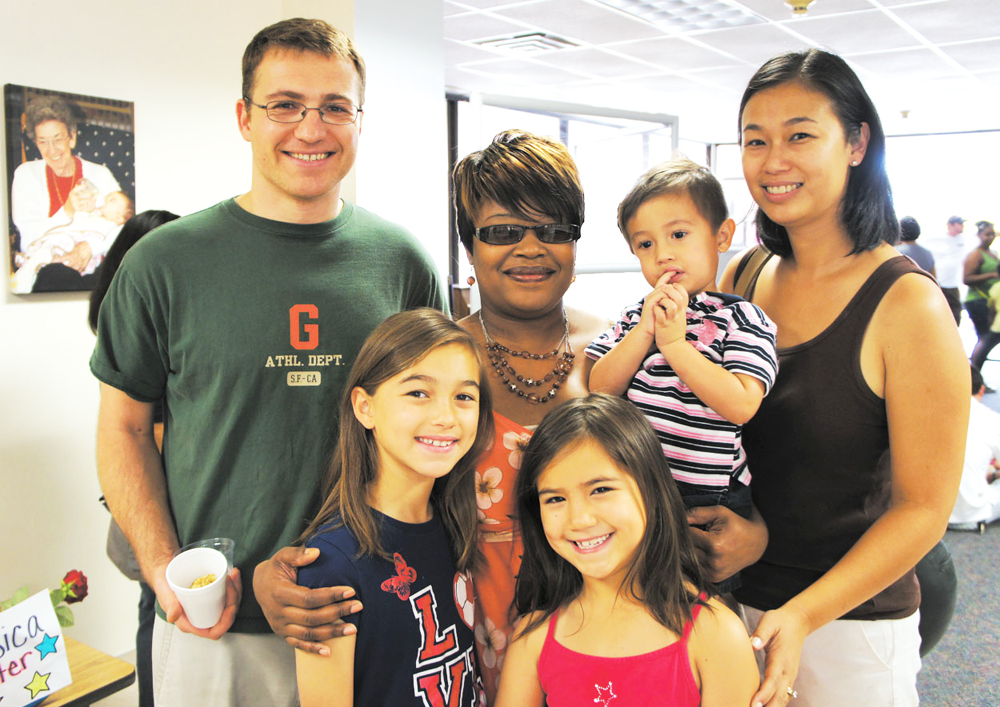 Celebrating their memories of the Beatitudes Agelink Intergenerational Child Development Center are Devisha King (center), who works with the 1- and 2- year olds, and the Feix family (from left), Jeff; Bianca, 10; Mia, 7; Alex, 2, and Teresita. Bianca and Mia both are graduates of King’s class, and Alex recently was in King’s class as well, but his parents will have to find him a new school when the center closes on July 12 (photo by Teri Carnicelli).

For 16 years, this unique program located adjacent to the Beatitudes Campus at 1548 W. Glendale Ave. brought together the young and the old in the nonprofit center, operating as the Valley’s only intergenerational childcare program. Students interacted with elders, some who were retired teachers, many of whom volunteered at the center. The program served children age 6 months to pre-kindergarten.

According to a note on the center’s website, “Revenues have not covered operating expenses since at least fiscal year 2005-06, which resulted in a steady decrease in reserved endowment funds. This deficit cannot be overcome by increasing enrollment. In addition, the Board determined that Beatitudes Agelink is not able to obtain grants or charitable donations in sufficient amounts in the necessary timeframe to close the gap.”

Hal Holman, chair of the Beatitudes Agelink board, says it was a combination of reasons for closing, including the changing demographics of the area as well as competition from public schools, many of which now offer pre-kindergarten for children as young as age 3. In fact, of the eight schools in the Madison Elementary School District, five of them offer pre-K.

Holman was very supportive of the Beatitudes Agelink program, saying it was good for the children to get exposure to the older generation. The board voted to close the school back in March. It was not easy.

“The reaction from teachers, specifically, was everything from very sad to pretty angry,” he says. The executive board first discussed the decision before taking it to the full board of eight people. “But with just eight people we talked for three hours,” he says.

And the reaction from parents has also been one of dismay. Jeff and Kimberly Bishop started sending their son, Zachery, to the school when he was 2 months old. Zachery is now 4 and his father says the location was perfect for the family. Jeff grew up in the neighborhood and bought his grandfather’s house; Zachery is the fifth generation to live in the same home. Jeff’s mother lives a few doors away.

Jeff has nothing but praise for the staff. “From the administration to the kitchen,” he says, they were all very nice and professional. “These people are going to need jobs in early childhood education, seek them out,” he adds.

The only thing Jeff wishes Beatitudes Agelink had done better was to time the closing of the school closer to the beginning of the year.

These two recent closures come on the heels of another long-time educational program shuttering its doors. Just last year, the Missouri campus of Rancho Solano Private Schools closed after 59 years of service. The building remains vacant, with weeds growing inside the added chain-link fence. Calls to officials with Rancho Solano were unreturned as of press time.