The Banner Concussion Center and an area nonprofit organization are addressing the dangers of concussions as girls’ soccer kicks into its busy season. 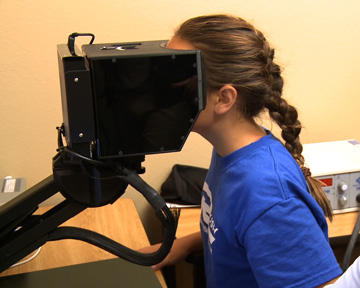 Dana Day, an audiologist, assesses the oculomotor functions of a soccer player with the Phoenix Rush club. The test, known as videonystagmography or VNG, is part of the advanced technology CACTIS provides at the Banner Concussion Center in Phoenix (submitted photo).

The frequency of concussions in girls playing high school soccer is 68 percent higher than for boys and it’s nearly triple the boys’ rate in high school basketball, according to research by scientists at Ohio State University, Nationwide Children’s Hospital in Columbus, Ohio, and the NCAA.

It’s a reality that the Banner Concussion Center, 1320 N. 10th St., and CACTIS Foundation take seriously. In addition to soccer, the CACTIS Foundation, a nonprofit focused on reducing the consequences of concussions, also is addressing head injuries in football, wrestling, hockey, lacrosse, basketball, cheerleading and baseball.

The CACTIS Foundation is collaborating with the Banner Concussion Center to provide advanced optometry and audiology services, expanding the center’s multidisciplinary capabilities and making the facility among the most comprehensive centers “under one roof” in the country.