It wasn’t long ago that the once-named Squaw Peak Elementary School was almost given up for dead. Like dozens of urban public schools challenged by budgetary constraints, the school saw its enrollment drop from almost 800 to just 250 students a few years ago. Some considered closing the school and selling the property. 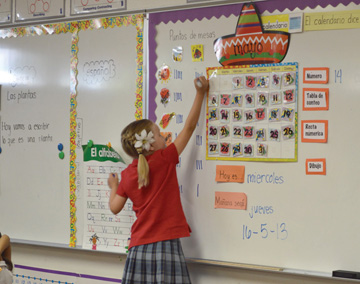 But the parents, teachers and administrators came up with a better idea—start an innovative new Foreign Language Immersion (FLI) program in which English-speaking students as young as kindergarten age spend half their days learning in English, and half in Spanish.

By the time Biltmore Preparatory Academy was given its new name in 2011, it was on an upward trajectory that has made it one of the great successes in public education in Arizona over the past few years.

In 2010, when the FLI program began, total enrollment was only 238 students. At the beginning of the 2012-13 school year, it had swelled to 408. The staff expects to have more than 500 students enrolled for the 2013-14 school year. The program has been astonishingly successful and popular with both students and parents.

But it’s not just the FLI program. Last year, Biltmore Prep was one of only five Arizona schools nominated for the prestigious National Blue Ribbon Schools Award. And the school has been designated an “A-Rated” school by the Arizona Department of Education.

Biltmore Prep is accepting new students for the 2013-14 school year for grades K- 8, both for the FLI program and for traditional education. For more information, call Faith Burtamekh at 602-381-6160.