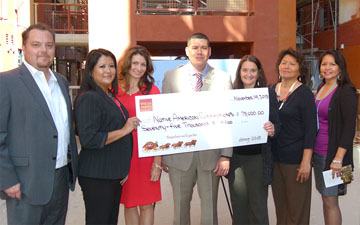 Wells Fargo & Company recently donated $75,000 to Native American Connections (NAC) of Phoenix as part of a $6 million in grants awarded across 67 nonprofits through its 2013 Leading the Way Home program Priority Markets Initiative to help stabilize and revitalize neighborhoods impacted by the economy.

The Leading The Way Home program Priority Markets Initiative provides grant support for neighborhood stabilization projects that are located in areas designated for revitalization to stimulate growth, stability and investment in distressed areas.

Native American Connections is actively involved and experienced in community revitalization efforts and was identified by Wells Fargo as being in need of extra help with large-scale neighborhood revitalization projects.

Priority Markets Initiative program grants can be used for any costs associated with the development or redevelopment of the project. Recipients must be IRS 501c3 organizations with successful histories of building or renovating housing for low-to moderate-income homebuyers.

Native American Connections is a multi-service community-wide organization that owns and operates 18 sites throughout Central Phoenix, offering a continuum of comprehensive behavioral health services and affordable housing which touch the lives of more than 10,000 individuals, families and children each year.