Karl’s returns in time for Easter

By Teri Carnicelli
It has been a tough eight months for the Boerner family but things are finally looking up as they get set to open the doors to their brand-new bakery space.

Karl’s Quality Bakery and The Baker’s Daughter, who in August were given just 10 days to vacate their established location at 7th and Dunlap avenues, found a new location just down the road at the Marketplace @ Central shopping center, at Central and Dunlap avenues. 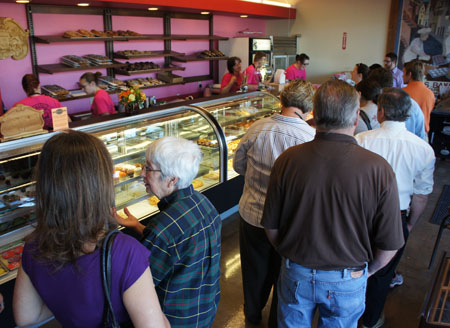 Karl’s Bakery had steady crowds on its opening day, April 1, and had sold out of most of its tasty treats by noon (photo by Teri Carnicelli).

But after their leases weren’t renewed and they were asked to vacate their spaces, the Boerner family tried to find a new home in the Sunnyslope community that had been such a strong customer base for nearly 20 years. The first location they looked at ultimately didn’t work out, but now things are full steam ahead.

The new, shared bakery-and-chocolates space is set to open at 6 a.m. on Tuesday, April 1, and Karl’s has pledged to offer its signature pumpkin doughnuts that longtime customers had to miss out on over the fall holiday season.

Christine will have her own chocolate room in the back with separate thermostat, and her own display case in the front of the store. There will be a couple of small tables with chairs outside where patrons can enjoy their purchases immediately, with sunshades to protect them—and the delicate chocolates inside—from the blazing sun.

The bakery’s 200-plus regular menu items will be in full force at the new location; however, the fancy coffee drinks that once were served at The Baker’s Daughter will be reduced to just regular coffee and espresso, so as not to compete with new neighbor Grinders Coffee Co.

There is one other significant change: because of the financial strain of not having a working storefront for so long, Stephanie ultimately took another job working as a job coach with troubled youth. It’s something she had done as a volunteer, working with youth in the old bakery site.

“She’s really firm but caring,” Christine says, which makes her a perfect fit for mentoring young people. She loves the work so much, Christine adds, that Stephanie likely will continue to do it in the afternoons and work at the new bakery in the mornings. Customers have come to expect to see Stephanie’s smiling face behind the front counter over the years.

“I just play in the back,” Karl laughs. “Stephanie is the one who is the heart of the bakery.”

They have had some income trickling in during the last eight months, selling their pastries at the Old Heidelberg Bakery at 22nd Street and Indian School Road, and some limited pastries and chocolates at the French Market, located at the southeast corner of 7th and Missouri avenues, which also served as a pick-up location for phone orders during the bakery’s closure. Both locations likely will continue to carry those products even after the new location opens.

Christine also created a crowd-sourced fundraising campaign on Indiegogo, which netted about $5,400.

But they have a long hill to climb to become financially solvent again, and two big April events should help get them on the right track. The first is the Sunnyslope Art Walk, set for 5-9 p.m. Saturday, April 12. The new bakery location is right in the heart of the main art walk area.

April also brings a major holiday—Easter. Karl’s will offer its festive chocolate bunnies, as well as chocolate lambs, hens and teddy bears. They sell out every year, so if you want a specific style, like the bunny pulling the basket of eggs or riding a scooter, it’s best to call and reserve one in advance.

Also available for the spring season are Lamb Cakes—a lemon Bundt cake in the shape of a lamb—and the traditional egg-shaped frosted cookies. Hosting an Easter brunch? Quiches are always a popular menu item, and Karl’s offers half and full sheets in four flavors: Lorraine (with bacon), spinach and mushroom, spinach and onion, and broccoli and onion.

Karl’s Quality Bakery and The Baker’s Daughter are located at 111 E. Dunlap Ave., Suite 13, facing Central Avenue. The bakery will be open seven days a week, with extended hours on Friday and Saturday. Call 602-997-7849 to place your holiday orders or e-mail bakers_daughter@q.com. They can also be found online at www.thebakersdaughter.net.