Home / Features / Local academy is winner of the ‘Recycle Bowl’

Local academy is winner of the ‘Recycle Bowl’

By Teri Carnicelli
The city of Phoenix, Arizona Recycling Coalition and Keep Phoenix Beautiful on March 3 recognized Phoenix Hebrew Academy as the Arizona winner of “Recycle Bowl,” a nationwide recycling competition for elementary-, middle- and high-school students. Arizona is second in the nation for number of schools participating in the competition.

Phoenix Hebrew Academy, 515 E. Bethany Home Road, recycled an average of 12 pounds per student in the contest’s two-week period. The school has a total of 132 students and their average pounds-per-student far surpassed much larger public schools in the Valley. 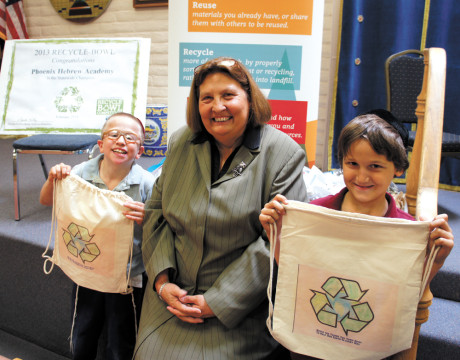 Sheila Shaffer, the middle school program instructor for the Phoenix Hebrew Academy, congratulates the two young men who came up with the winning slogan and artwork for the school’s reusable canvas bags. Yaakob Almoslino, left, 12, and Shmuel Brekan, 9, were the lucky winners. The bag’s slogan reads, “Reuse the things you throw away to help our Earth in every way” (photo by Teri Carnicelli).

In addition to bragging rights, Phoenix Hebrew Academy received a $1,000 check from Keep America Beautiful, the program’s administrator. Other sponsors include Nestlé Waters N.A. and ReCommunity.

The award ceremony was attended by Phoenix Vice Mayor Jim Waring, Councilman Sal DiCiccio and members of the city’s Public Works Department, as well as representatives from the Arizona Recycling Coalition and Keep Phoenix Beautiful.

As part of the school’s ongoing recycling efforts, the sixth graders researched what the largest amount of waste was that the school produced that was going into the dumpster instead of a recycling bin. They discovered that 6 percent of that waste was white office paper.

Phoenix Hebrew Academy, an Orthodox Jewish day school founded in 1965 by Rabbi David Rebibo, also ran a school-wide contest to come up with a logo and motto for a reusable canvas tote bag.

“We really enjoyed participating in the Recycle Bowl,” said Rabbi Isaac Entin, principal, Phoenix Hebrew Academy. “Every time you drop something in that bin, you feel like you are doing something good.” He pointed out that everyone, including his students, has a responsibility to the Earth and to the future.

Sheila Shaffer, middle school program instructor for the Phoenix Hebrew Academy, said the school has always recycled but hadn’t been as aware of how much more could be done. She took the opportunity to integrate the recycling contest and message into the school’s science curriculum as well.

Recycling resources
The city of Phoenix offers its residents a wealth of recycling opportunities and tips. It hosts monthly Household Hazardous Waste and electronics collections at rotating sites around the city. The next HHW event takes place 8 a.m.-12 p.m. April 10-12 at Paradise Valley Park, 17642 N. 40th St. The event entrance will be on 40th Street near the community center.

If you have an old water heater, refrigerator, freezer, stove, dishwasher or other home appliance that is no longer working, the city will pick it up and have the parts recycled for a small fee. After proper removal of regulated materials, such as refrigerants, recyclable materials will be taken to a scrap metal dealer. Call the Solid Waste Customer Service Call Center at 602-262-7251 to set up collection or e-mail pwserve@phoenix.gov.

The city also advises residents on how to reduce the amount of items being placed in their residential recycling bins by stopping unwanted junk mail, such as credit card and insurance offers, as well as phone books that aren’t being used. Tips on how to get the junk mail stopped at your home can be found on the city’s website, www.phoenix.gov, under the Public Works Department.