Child drownings can be prevented

By Teri Carnicelli
North Central mom Christie Shaw-Ulichny’s voice shakes as she talks about the day she nearly lost her daughter, then age 2. It was a birthday pool party at her home, she explains, and her husband, Mike, was stationed inside the pool to keep an eye on the kids. Somehow their little girl went from sitting on the top step to being submerged under water, just a foot away—and behind Mike. It was the alarming cry from a friend standing by the patio that alerted Mike, who quickly pulled Maddie out of the water. 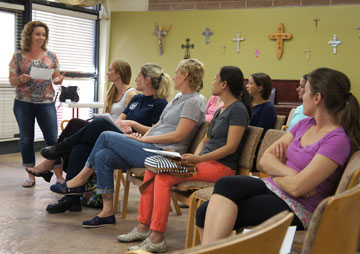 Pam Kasovac, who teaches swim lessons at her North Central home, shares pool safety tips with mothers from Cross Roads Preschool and Kindergarten, including (far left) Christie Shaw-Ulichny, whose daughter nearly drowned during a pool party at her own home, and (second from left) firefighter paramedic Lindel Millar, who shared her personal experiences of responding to a child drowning emergency call
(photo by Teri Carnicelli).

Maddie was conscious and spewing out the water from her lungs and stomach, but they took her to the hospital just to be safe. She eventually was given the all-clear. But to this day, Shaw-Ulichny is stunned by what happened. She and Mike both grew up around water, were strong swimmers, and were, they thought, very aware of their children’s locations at all times. It was their overconfidence, she said, that nearly spelled death for Maddie.

“For weeks on end, I sat on the edge of my bed with my head in my hands asking, ‘How did this happen? Why did we get so comfortable that we didn’t have our eyes on her, the way we should?’”

She was addressing a group of parents—mostly mothers—at Cross Roads Preschool and Kindergarten’s annual Water Safety Day, held on March 12.

Also sharing stories and key water safety tips was Channel 10 Chief Weather Anchor Dave Munsey, who is known throughout the Valley for his “Watch Your Kids Around Water” tagline and community campaign that he started in 1980 to help prevent child drownings. Thirty-four years later, he still does presentations like this, because, he says, “Even if I get just one person to go home and improve the safety around their pool, if I get one family to be more aware, then it’s worth it.”

Munsey said he started his public-awareness campaign after the 2-year-old son of a close family friend drowned in a lake. The first three adults to reach him—including the boy’s father—didn’t know CPR.

“Studies have shown there is a rise in drowning incidents when something changes in the family dynamic—a new job with new hours, a vacation away from home, even having new carpet installed,” Munsey says. “Your schedule changes, you get distracted, and that’s all it takes to lose focus for a minute.”

Munsey played a tragic 9-1-1 call from a mother whose young son fell in the pool and was unconscious. The operator was trying to talk her through doing CPR, but the woman was too distraught to do anything. The boy died.

Many of the mothers in the room were in tears.

“We need parents to hear the tragedy,” Munsey said. “We need them to believe it could happen to them.”

North Central resident and firefighter paramedic Lindel Millar knows only too well how easily a child can accidentally drown. She’s been on more emergency calls than she cares to think about, especially as the mother of a 6-year-old son.

Millar, who works for the Glendale Fire Department, explained to the parents that in the summertime, many child drownings happen to children from ages 18 months to 5 years during pool parties where there may be lots of adults around, but they often are socializing. Someone may have been put in charge of watching the pool area. But with so much going on, that person can easily be distracted.

Whether there is a festive event like a party or just family time in a home or apartment pool area, “The only way to avoid this unthinkable tragedy is constant supervision around water,” Millar emphasizes.

Millar said the fire department has a special alert tone for when the emergency call is a child drowning. “Your stomach just drops. You try to get everything ready en route, who is going to handle what, even as you prepare for the worst-case scenario.

“It’s a high-stress incident for everyone,” she said, adding that, “Every firefighter after a drowning calls their kids just to hear their voices and know they are OK.”

Pam Kasovac, who teaches swim lessons at her North Central home, offered several tips to help prevent this kind of tragedy from happening. She emphasized keeping all pool equipment and toys put away when finished swimming, somewhere removed from the pool area. Toys are like a magnet to children, she pointed out, and to leave one in a pool or on the pool’s edge creates a potentially dangerous situation.

Kasovac also advised checking the pool area first when a child goes missing, and not walking around the house calling his or her name.

“Those extra couple of minutes could be the difference in saving a child’s life,” she said.

She also told the parents not to get overconfident if their children wear floatation devices on their arms or use an inflatable swim ring. Because what happens if they go to a friend’s house that doesn’t have those items, and they get in the pool anyway? Both a parent and a child can rely too much on flotation devices for safety, she said. Teaching children to swim is a far more effective safety measure.

For more information and tips about water safety, visit www.preventdrownings.org. To learn more about Pam’s School of Swim, go to www.pamssos.com.

By the numbers
Maricopa County drowning incidents and fatalities took a nosedive in 2013, according to statistics collected by the Children’s Safety Zone for the Drowning Prevention Coalition of Arizona (DPCA).

Pediatric and child fatalities were half of what they were in 2012 and teen/adult fatality numbers dropped from 40 to 33.

In 2013 there were 140 total incidents, resulting in 43 fatalities—10 of which were children ages birth to 5 years old.

As of March 19, 2014, there have been four child drownings in the Valley area, one of which was a child under the age of 5 in Phoenix. The others were in Mesa, El Mirage and the Daisy Mountain area.

“Barriers remain one of most common broken links in the injury prevention chain,” Lori Schmidt, DPCA president, said. “The lack of pool fences across the Valley is alarming. There are too many pools left unprotected because they were grandfathered in or city ordinances provide loopholes.”

The DPCA stresses that families should take a 3-pronged approach to drowning prevention: Block, Watch, Learn.
• Block: Block access to water hazards. Put fences around pools, use protective covers on spas, close bathroom doors, and dump out water buckets.
• Watch: Watch each other around water. Neither adults nor children should swim alone. And if you lose track of children, always check your water hazards first.
• Learn: Learn CPR and ensure all family members know how to swim.