By Teri Carnicelli
It’s a busy day at the Acacia Health Center but facility Admissions Coordinator Lina Kuhn is wearing her “other hat” on this particular morning, and she’s got two excited, wagging friends in tow.

Kuhn’s two Shar-Pei and St. Bernard mixes, Dolly and Domo, are regular visitors at the center, co-located inside Sagewood, a senior care community at 4555 E. Mayo Blvd. The brother-and-sister duo visit with residents of Sagewood as well as patients at the health center, bringing smiles to their faces—and adding a few licks there, if they get a chance. 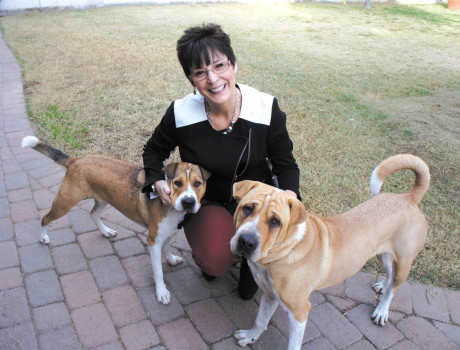 Dr. Helene LaBonte, DO, CMD, medical director for Acacia Health Center, is a member of AMDA (formerly the American Medical Directors Association). She told Kuhn about the annual Caring Canines Calendar produced by the AMDA Foundation and suggested getting Dolly and Domo inside the 2014 edition.

The calendar features dogs and other animals that live or spend time in post-acute/long-term care facilities as therapy pets and companions. “Dr. LaBonte said Dolly and Domo represent everything this calendar stands for,” Kuhn explains. “The therapeutic value of animals in a person’s recovery is paramount to a successful outcome.”

There were more than 100 photos submitted nationwide, and Dolly and Domo made the cover, along with Joan Feddern, a resident of Sagewood who also spent some time at the Acacia Heath Center after an injury from a fall. “She felt the dogs were a significant part of her recovery, so she was a perfect model to pair with them,” Kuhn says.

Domo also is on the page for the month of April.

“We were all so excited to hear the news the dogs had made the calendar,” Kuhn says. “Residents who had been at the health center and gone home sent e-mails or called to congratulate us on the selection of the dogs. They all felt Dolly and Domo helped them so much in their recovery; it was the perfect way to send the message of the value of animals.”

Kuhn came across the pair of pooches at the Lost Our Home Pet shelter when they were just 3 months old. “The day I picked them up I needed to return to work so they spent the afternoon with me,” Kuhn recalls. “That day it was abundantly clear the love these two had for people, and the need for this love by the patients was a perfect fit.”

The dogs are just over a year old now, and Kuhn laughs that she had a lot of help from the Sagewood residents in raising them.

“I love watching the dogs put smiles on the residents’ faces,” she says. Some watch the frisky siblings playing outside on the lawn, while others go for a more hands-on approach. Several treats often are to found in those eager hands. And the dogs are just as eager to come visit.

“Domo loves people so much and enjoys coming to the health center. In fact, there are days when I trip over him trying to get out the door because he is not going to be left behind,” Kuhn admits.

Dolly and Domo can be seen walking the streets of Central Phoenix for exercise and they visit with everyone who happens to cross their path.

“This adventure was not a plan for my life but I am so grateful for the opportunity,” Kuhn says. “The greetings and enthusiasm of the residents when they see the dogs warms my heart and ends up being therapeutic for me as well.”

The 2014 ADMA Caring Canines Calendar contains photographs and stories selected from the submissions contributed by PA/LTC residents and staff members, pet lovers, and professional photographers through a nationwide campaign. In addition to dogs, the 2014 calendar features cats and birds.

“The day I notify the featured pets’ owners of their inclusion in the calendar is one of my favorite days of the year,” said Christine Ewing, AMDA Foundation operations manager. “I get to talk to some very proud and excited people.” She added, “They are all passionate advocates of how important animals are in the lives of their residents, and they are eager to share their stories with others.”

The calendar is available for purchase online at www.caringcaninescalendar.com. Proceeds from the calendar support AMDA Foundation’s programs, including its Futures Program, which educates young physicians about careers in post-acute/long-term care and partners them with mentors.