By Teri Carnicelli
The Sunnyslope Kiwanis Club, first chartered in 1987 by a group of local business owners, has made a significant impact on the community it has tirelessly served over the years. Students of the Month were celebrated; local police officers were honored; children at Desert View Elementary received a Christmas party and gifts; and all third graders in the Washington Elementary School District receive a dictionary each year. 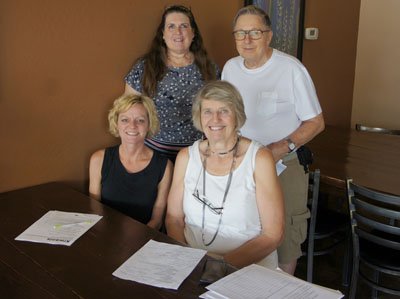 Among the few remaining Sunnyslope Kiwanis Club members, who met for a final farewell on Sept. 22, are, clockwise from bottom left: Betsy Durkin, club member for six years and Key Clubs coordinator; Julie Sertich, club treasurer and a member for 16 years; Dave Hanner, a charter member of the club since 1987; and Kay Schnizlein, a member for four years (photo by Teri Carnicelli).

Club members served as Salvation Army bell-ringers during the holidays, provided refreshments at the annual Spring Fling at the Sunnyslope Community Center, served as volunteer readers in local elementary school classes, and more.

But over the years, club membership has dwindled, and some of the programs, such as the Officer of the Month and Student of the Month, have gone away.

With longtime members aging, and a lack of younger community members joining up, the club has struggled to find its footing and maintain its momentum.

The remaining active members made the tough decision this summer to formally disband the club as of Sept. 30.

“We cannot maintain a large enough member base of individuals who want to take over leadership responsibilities,” explained Craig Dean, former president of the club. “Many clubs are merging and it is a problem nationwide with not only Kiwanis but Rotary, Lions and many others. Young people are not joining and we just can’t sustain our goals anymore.”

However, it does not mean an end to some of those important, ongoing programs, such as the high school scholarships, the third-grade dictionaries, and the club’s sponsorship of two Key Clubs at local high schools.

Instead, former members are being encouraged to sign on with the North Phoenix Kiwanis Club, a much larger group with its own affiliated nonprofit foundation.

“We, as a club, discussed this at length and felt merging was the best way to serve our community,” Dean said. “North Phoenix will continue to serve Sunnyslope with the dictionary program and other activities we have done in the past.”

“Sunnyslope Kiwanis has been a vital partner to the 24,000 students in WESD and the Sunnyslope and Central Key Clubs,” said Jill Hicks, director of Communications and Public Engagement Department for the Washington Elementary School District—who also is a longtime Sunnyslope Kiwanis Club member. “Kids count on us; imagine if there was a student who had been waiting since kindergarten to get his very own dictionary and we didn’t do it.”

The two clubs held their first “get to know each other” joint meeting on Sept. 6 at Spoke & Wheel Tavern in Sunnyslope. The North Phoenix Kiwanis Club actually meets in the Sunnyslope community the first and third Tuesdays of the month for lunch at Spoke & Wheel, so it makes the transition a little easier for former Sunnyslope Kiwanis Club members.

“I think it will be a wonderful fit … and a great way to plan to continue the great work Sunnyslope has been doing,” said Jim Day, incoming president of North Phoenix Kiwanis.

A handful of Sunnyslope Kiwanis Club members got together for a final lunch on Sept. 22 at North Mountain Brewing Company to discuss the transition and air their concerns. How many members will join with North Phoenix? Who will keep their signature programs, such as the annual Dinner in the Desert—which funds the third-grade dictionaries—going under the umbrella of the new club?

There were a lot of uncertainties, but also an underlying hope that the Sunnyslope community will still be served, perhaps in new ways and with new faces as members of the North Phoenix Kiwanis bring their passion and interest to this unique and close-knit community.

One project that both clubs have partnered on in the past is the annual Walk-A-Thon, which is set for 7:30 a.m. Saturday, Oct. 22, at Metrocenter Mall. All groups who participate in the one-hour walk will receive a significant percentage of the funds they collect for use by their organization, and the remaining pledges will go to the North Phoenix Kiwanis Foundation, a nonprofit organization that benefits local children’s charities. The event includes a raffle, course contests to challenge walkers, door prizes and snacks.

Teams can still register for the Walk-A-Thon, and supporters are welcome to come and make last-minute pledges. For more information, call Jim Day at 602-799-6868 or e-mail watteam@northphoenixkiwanis.org.